It is Tuesday, and you know what that means, another drool-worthy day with the talented bakers over at Tuesdays With Dorie.  This week’s challenge is the Florida Pie. It is a variation on a Key Lime Pie. I have never had a Key Lime Pie, I know, that is weird, so I was excited to try out this recipe.  We were having company over for dinner, so this was the perfect finishing for the meal we had planned. What was even more perfect, was that Lenny wanted to help make it.  I know he is really taking that active role in this whole “cooking” and “blogging thing”.  Don’t be scared, it too shall pass.  Let’s make pie! 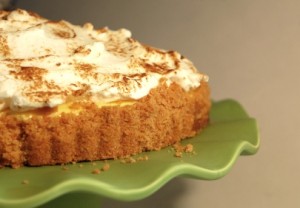 The recipe is pretty straightforward and simple. I did use unsweetened flaked coconut for the coconut cream portion of the recipe.  We don’t care for over the top sweet as well I skipped the coconut in the meringue. As I was saying it was really simple, so easy that we even made our own crust.  Then we made the coconut cream and the filling and baked it all. After letting it set up for an hour in the freezer we started with the meringue.

Lenny was eager to help with the warming of the eggs as he had helped with this process another time, so he mixed the sugar with the whites and started whisking away at the stove, while I got our mixer ready. After a few minutes, I hear him say, “I don’t think they should look this way.” Sure enough, scrambled whites. Toss them out, wash everything up, and started again.

This time the action time at the stove was perfect, the whites were warmed and the sugar dissolved, off to the mixer and it continued going smoothly. Until I decided to clear off the counters, to free up space, as I grabbed the photo sweep, it sweeps the bag of pearled sugar into the mixer!!  Plastic bag and big chunks of sugar all over the “perfect” meringue. Time to try it one more time and this time it had to work as we only had 6 eggs left and I needed them for some macarons we were making!

All was fine and Lenny had a great time using our kitchen torch, to brown the meringue.  It came out so pretty! I took over 300 photos – thank god for digital – to get the right one. 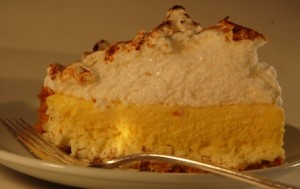 The pie was really good.  The crust was crumbly, the filing and the coconut cream had the perfect smooth texture, and it was not over the top sweet, as well it was not overpowered by too much coconut, and it was surprisingly light. The only thing, it was really not “key limey” or “citrusy” tasting, next time I would add more lime to it. Definitely will be a new favorite in our house, for summertime dining.

Here’s the recipe from Dorie Greenspan’s Baking from My Home to Yours book.

Center a rack in the oven and preheat the oven to 350 degrees F. Put the pie plate on a baking sheet lined with parchment of a silicone mat.

Put the cream and 1 cup of the coconut in a small saucepan and bring it to a boil over medium-low heat, stirring almost constantly. Continue to cook and stir until the cream is reduced by half and the mixture is slightly thickened. Scrape the coconut cream into a bowl and set it aside while you prepare the lime filling.

Working with a stand mixer, preferably fitted with a paddle attachment, or with a hand mixer in a large bowl beat the egg yolks at high speed until thick and pale. Reduce the mixer speed to low and beat in the condensed milk. Still on low, add half of the lime juice. When it is incorporated, add the reaming juice, again mixing until it is blended. Spread the coconut cream in the bottom of the graham cracker crust, and pour over the lime filling.

Bake the pie for 12 minutes. Transfer the pie to a cooling rack and cool for 15 minutes, then freeze the pie for at least 1 hour.

To Finish the Pie with Meringue:

Put the 4 egg whites and the sugar in a medium heavy-bottomed saucepan and heat over medium-low heat, whisking all the while, until the whites are hot to the touch. Transfer the whites to a stand mixer, fitted with the whisk attachment, or use a hand mixer in a large bowl, and beat the whites at high speed until they reach room temperature and hold firm peaks. Using a rubber spatula, fold the remaining 1/2 cup coconut into the meringue.

beautiful pie! i can't believe you have never had a key lime pie before... i thought it was tart and lime-y but i guess you could add some zest next time to make it more citrusy :)

a key lime pie with a coconut pie on top? excellent.

stackable pie is where it's AT.

It's nice to know that I'm not the only one who has kitchen catastrophes, LOL! I'd say you made a great recovery, because your pie looks excellent!