The June Daring Bakers’ challenge is being hosted by Jasmine of Confessions of a Cardamom Addict and Annemarie of Ambrosia and Nectar. They chose a Traditional UK Bakewell Tart that was inspired by a rich baking history dating back to the 1800’s in England. 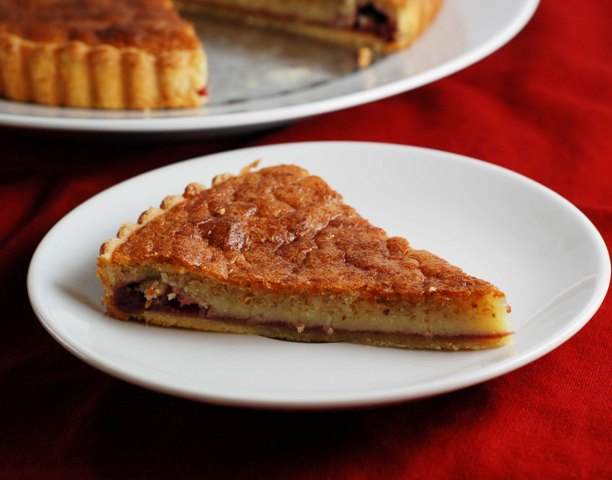 “This pudding is famous not only in Derbyshire but in several of our northern counties where it is usually served on all holiday occasions.”

By the latter half of the 1800s, the egg custard evolved into a frangipane-like filling; since then the quantity of jam decreased while the almond filling increased.

This tart, like many of the world’s great foods, has its own mythic beginnings…or several mythic beginnings. Legend has it in 1820 (or was it in the 1860s?) Mrs. Greaves, landlady of The White Horse Inn in Bakewell, Derbyshire (England), asked her cook to produce a pudding for her guests. Either her instructions could have been clearer or he should have paid better attention to what she said because what he made was not what she asked for. The cook spread the jam on top of the frangipane mixture rather than the other way around. Or maybe instead of a sweet rich shortcrust pastry case to hold the jam for a strawberry tart, he made a regular pastry and mixed the eggs and sugar separately and poured that over the jam—it depends upon which legend you follow.

Regardless of what the venerable Mrs. Greaves’ cook did or didn’t do, lore has it that her guests loved it and an ensuing pastry-clad industry was born. The town of Bakewell has since played host to many a sweet tooth in hopes of tasting the tart in its natural setting.

Bakewell tarts are a classic English dessert, abounding in supermarket baking sections and in ready-made, mass-produced forms, some sporting a thick sugary icing and glazed cherry on top for decorative effect.

Enjoy it with a cup of tea or coffee or just eat it sneaky slice by sneaky slice until, to your chagrin, you realize the whole tart has somehow disappeared despite you never having pulled out a plate, fork or napkin with which to eat it.

Is it a tart or is it a pudding?

Someone once said something like “The Bakewell pudding is a dessert. The Bakewell tart is that girl over there.”

It’s a debate that rages on and we aren’t taking sides on this one. But we will say that many people call this pudding a tart.

While we’re at it…
The etymology of pudding is a rather interesting and slightly convoluted one.* The naming confusion may come from the British manner of referring to the dessert course as ‘pudding’ (as well as referring to fat babies by the same name, though we don’t think that is what was the inspiration in this case). And so any dessert is a pudding until another name comes along and adds clarity to what it really is.

What a beautiful tart, i also like tart so much.

You tart looks so nice and moist! Lovely!

Love you pix of the tart and good to hear that you loved it like me. Cheers from Audax in Australia

Thanks for participating. j