When we were teaching an online food video group, Wednesday nights became the “must have easy dinner planned” nights.  We got tired of salads after about 52 weeks of them and finally received new inspiration from one of the assignments from the group.  I cannot remember the exact assignment but our friend Emily from Jelly Toast Blog made a video on how to make a frittata and this recipe, or a version of it became a regular around Chez Us.  We started calling it the “Emily.”  I make this summertime version of the Emily very often, and I have to say even though Lenny does not like zucchini he does enjoy this recipe for a Zucchini Fennel Frittata. 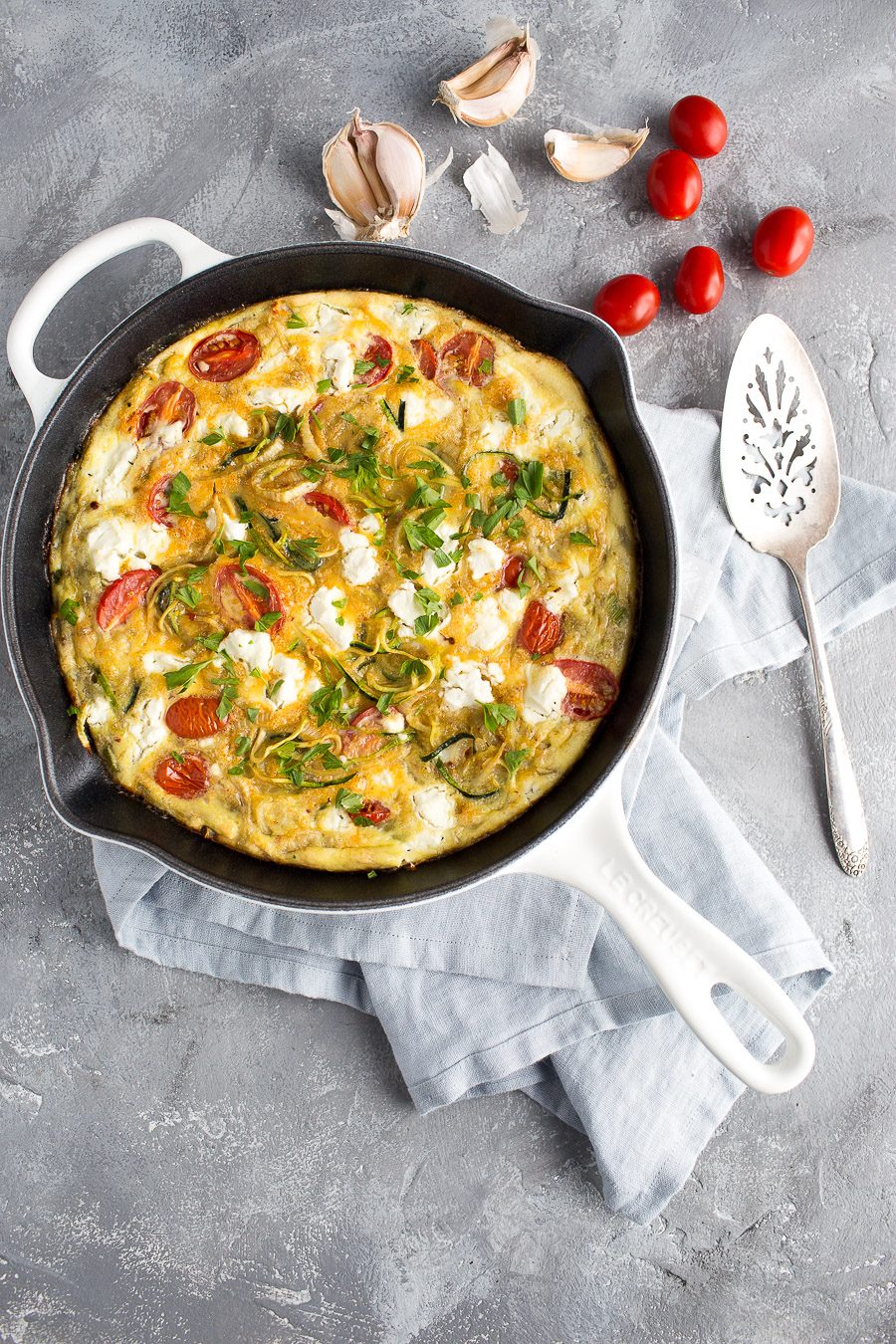 A frittata is a kind of like an omelet and kind of like a quiche but not like either of them. A few things that I like about making a frittata is that the leftovers become breakfast. Score; two meals in one recipe! It has also become my “let’s clean out the fridge before traveling recipe”. The other thing I like the creativity that comes with making one. I typically throw just about anything into it, which makes it a great seasonal recipe.

Our summer version stays the same as I like to sneak zucchini into as many recipes as I can because I like it, and I think it is good for you. Lenny tolerates it, and hey he eats anything! And fennel is a great addition all summer long as it is bright and fresh in everything from eggs to salad and even to nosh on. So next time you need a quick, easy and light dinner whip up this recipe for a Zucchini Fennel Frittata or as we like to call it, the Emily! 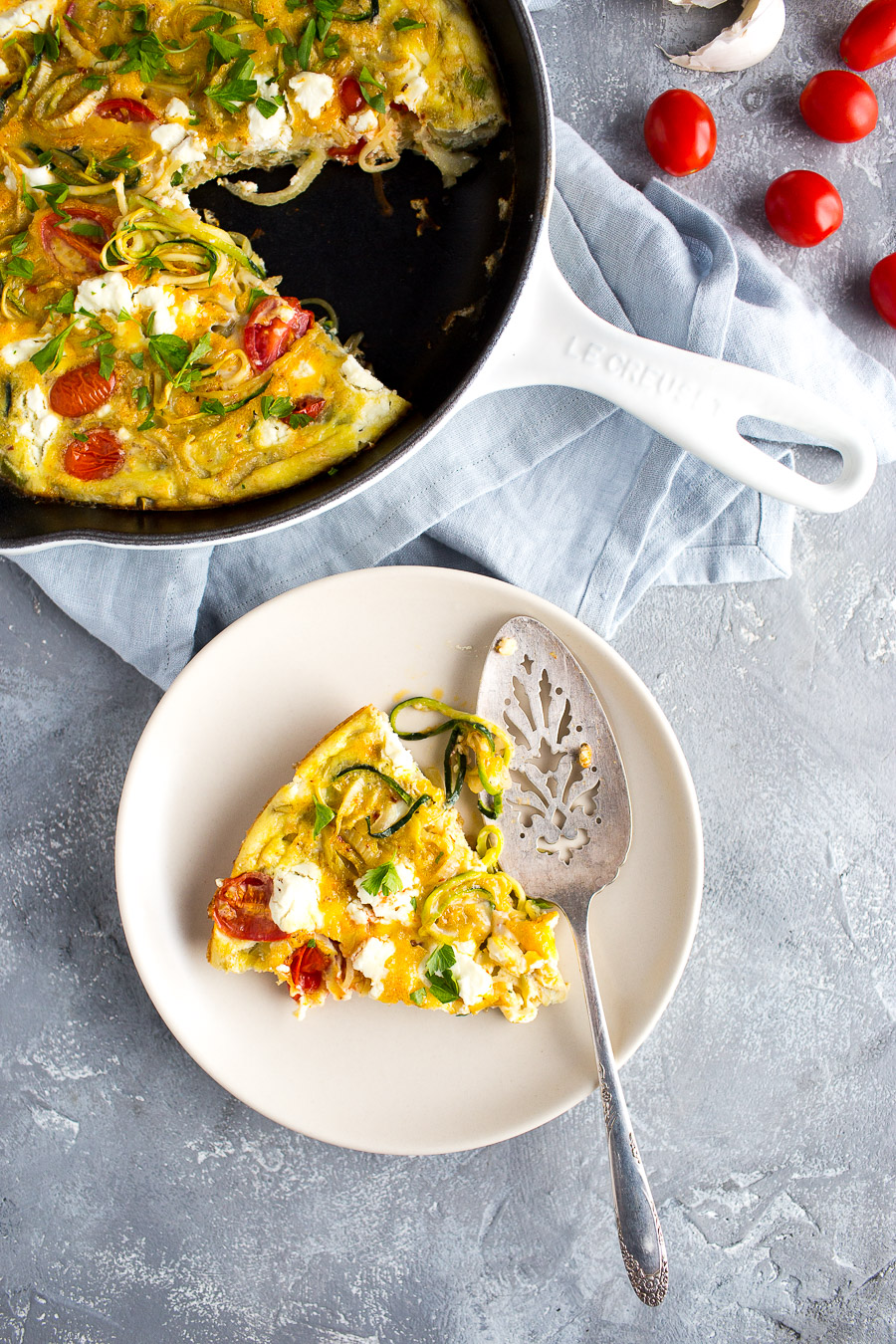 Add 1 tablespoon olive oil as well as the yellow onion. Stir and cook until slightly soft; about 3 minutes.

Add the fennel, stir and cook for another 3 minutes. Then stir in the zucchini and garlic and cook just until the zucchini is lightly wilted. You want it to be bright green, and not overcooked.

Remove from the heat, stir in the tomatoes and season to taste with salt and pepper.

Whisk the eggs together with 1 tablespoon olive oil.

Place the frying pan back on the stove over medium heat and pour the whisked eggs over the top. Cook for 1 minute.

Remove from the heat and sprinkle the goat cheese over the top.

Just found your frittata recipe last night when i searched for recipes using fennel and zucchini - items I had on hand and needed to use up. This turned out great. I subbed some red bell pepper for the tomatoes, upped the goat cheese (just because!), and seasoned with a little oregano. Thanks for a nice and easy recipe that's also very tasty.

Hi Kathy! We are so glad to hear you love our frittata recipe. We mix it up all the time too using whatever is in the house. Sometimes I call it everything but the kitchen sink frittata!

Such a great idea. I love making quiche, but I'm not a fan of premade crust and don't often have time to make my own--it's the thing that keeps me from making quiche sometimes. This is an excellent alternative that I hadn't thought about.

We are just quiche fans too but sometimes light and wonderful is nice, which is why a Frittata is a great addition to a menu.