I have been trying to get this recipe for Tater Tot Nachos perfected and shot before the big game, and I just made it.  First things first, why did the tater tot disappear for so long?  I fell back in love with the crispy tater tot after having them served with a meal in Southern California.  Ever since I have been thinking of a million ways to use them beyond snacks.  This recipe for tater tot nachos is the bomb and it is going to be a big hit at your Superbowl party!  You still have time to run out and grab the ingredients, as they are simple to find, so hurry and just do it.  Then thank me later. 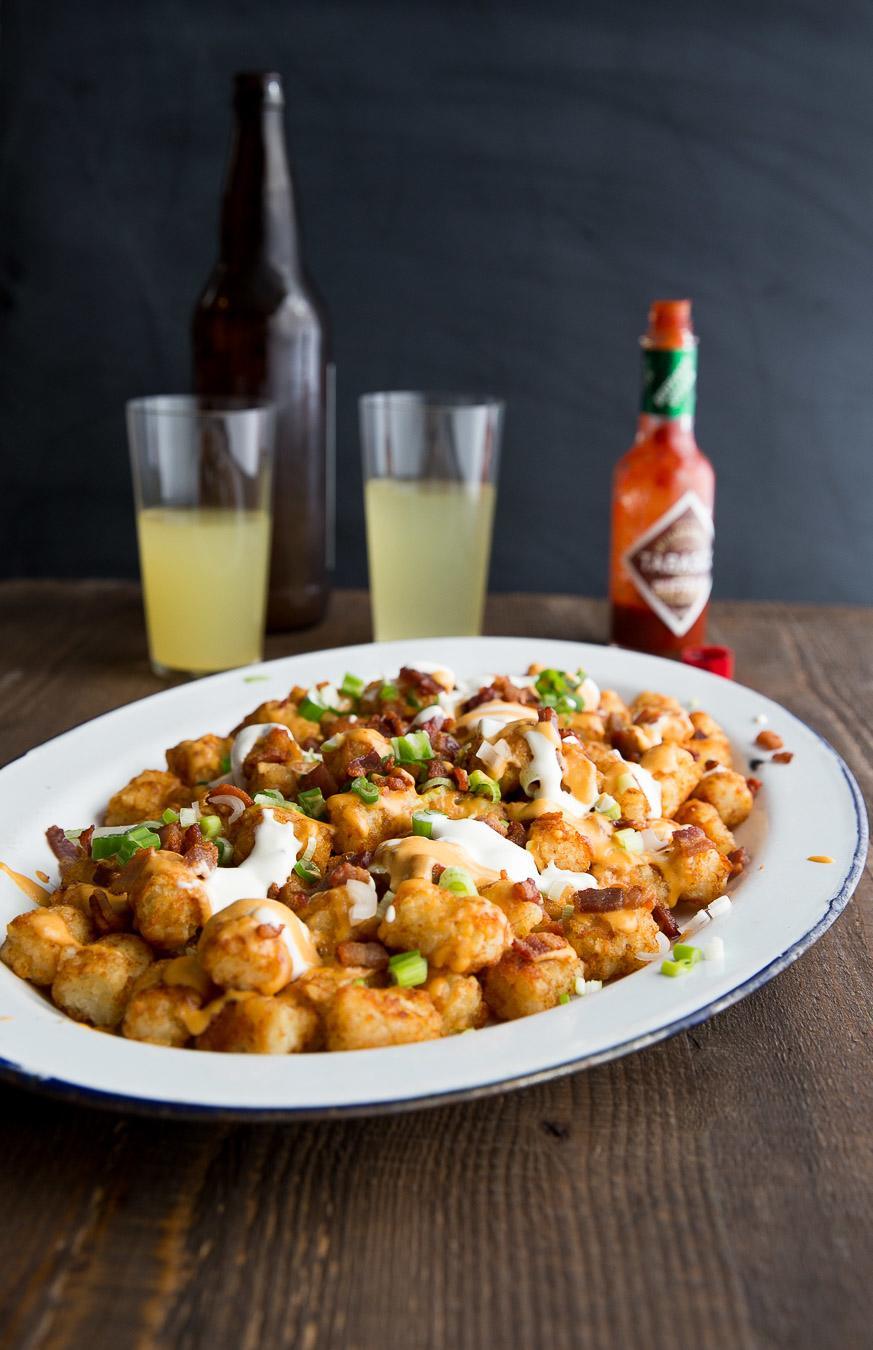 This recipe for Tater Tot Nachos came about after a trip to Long Beach.  This is going to be weird when you read it, but this food memory came about after a visit to Hooters.  OMG!  Never thought those words would come out of my mouth.  We were waiting for the ferry to Catalina Island, and our options were slim.  If we hadn’t been driving all day to get to Long Beach, we might have waited until we got to the island.  Instead, we headed into our only option, for some icy cold beers and a platter of Tater Tot Nachos.  That platter of potatoes was either good or we were just hungry, but we kept talking about it, five years later.  I have a feeling if we went back the experience would not be the same, but I can guarantee you this recipe for Tater Tot Nachos is way better than the ones we had at Hooters! 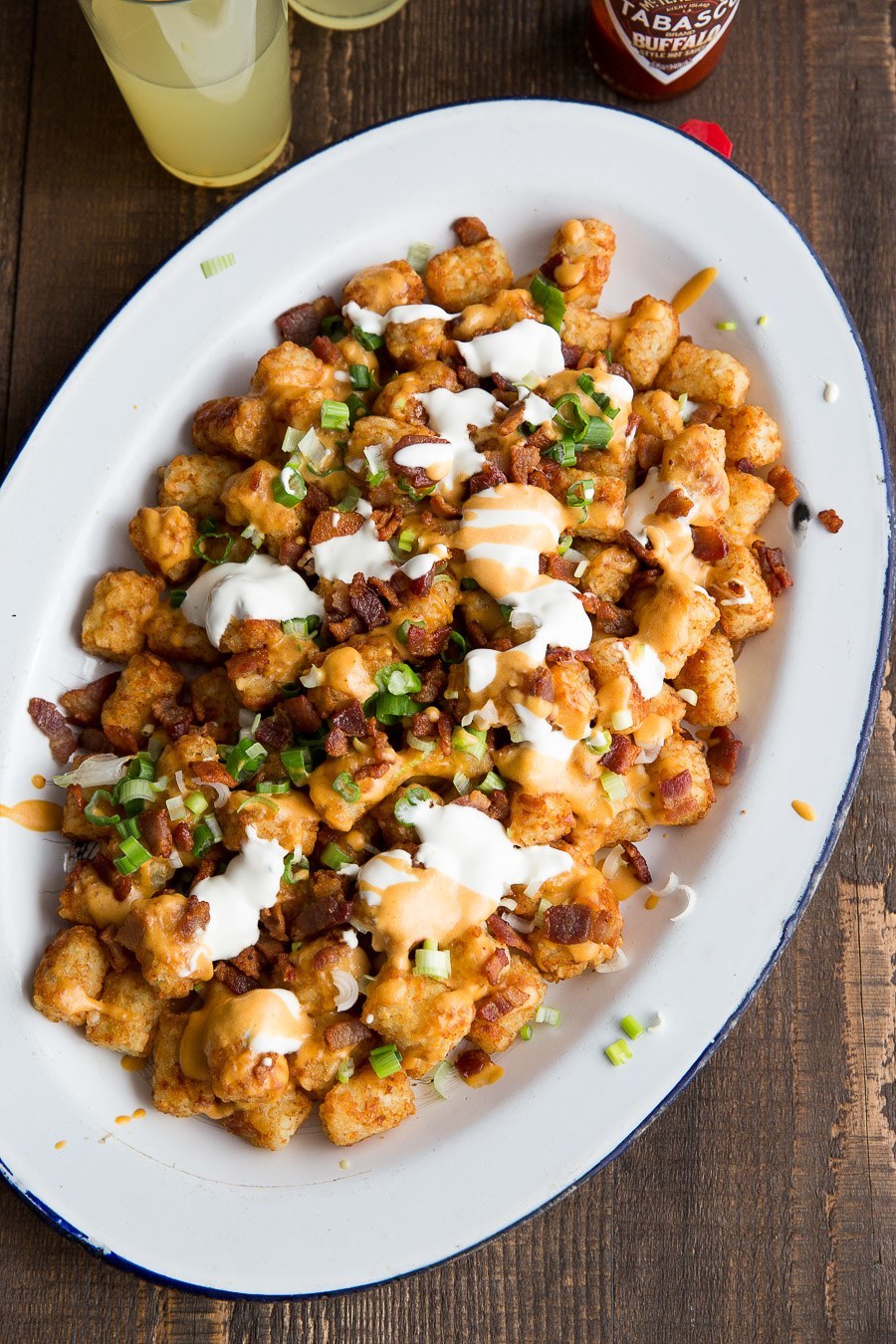 My recipe is slightly different as I decided to make a spicy, cheesy sauce to pour over the tater tots instead of melting cheese over them.  I got the idea after we made pounds of mac and cheese for some videos we shot last year, and one of the recipes had this amazing creamy cheese sauce.  What makes this sauce so creamy and so reminiscent of that orange cheese of our youth is using evaporated milk.  The sauce ends up so smooth and thick;  heavenly!  I mixed things up by adding Tabasco Buffalo Sauce to give it some kick as well as lots of crispy bacon! 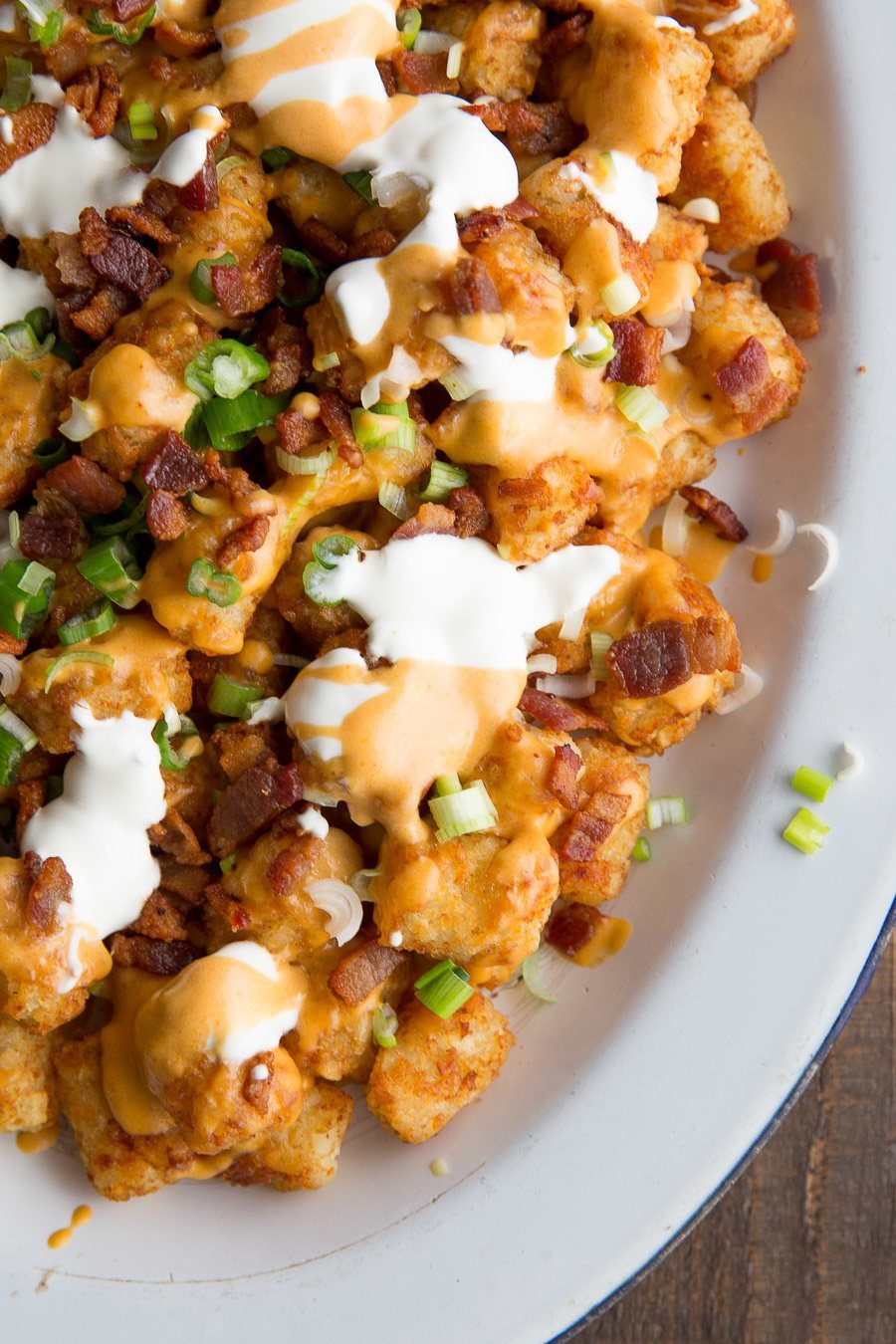 Scatter the tater tots onto a cookie sheet and place them into the oven. I cooked for a total of 37 minutes as I like the potatoes to be a bit crisper than usual. They will hold up better under the cheesy sauce.

While the tater tots are baking cook the bacon and make the sauce.

Cook the bacon until golden brown and crispy. Drain with a slotted spoon and place the bacon on a paper towel.

Toss the cheese with the flour. Set aside

In a small saucepan melt the butter, then add the evaporated milk and gently warm over low heat.

Stir in the cheese, and continue stirring until melted and very smooth.

Add the hot sauce, stir and continue cooking over low heat until thickened.

Remove the tater tots from the oven, let sit for a minute, and then place onto a serving platter.

Drizzle with half of the cheese (save some for serving on the side or another batch), then scatter with the bacon and green onions. Add dollops of sour cream.

What a fun, shareable treat!

Thanks! We are thinking of making a Mexican inspired version for Cinco de Mayo!

Hooters ugh. So really should hate these but what a brilliant idea! Especially with that bit of extra spice; SO trying these!