When it comes to picking out a beer to drink, I am often intimidated.  There are so many choices.  I know what I like, and tend to stick to that style.  That was until I read Food on Tap:  Cooking with Craft Beer by Lori Rice. I feel like my world has been expanded beyond drinking beer.  I cannot wait to jump into cooking more often with craft beer.  This recipe for Amber Ale French Onion Soup Dip has quickly become a favorite as well as a few recipes in the book. 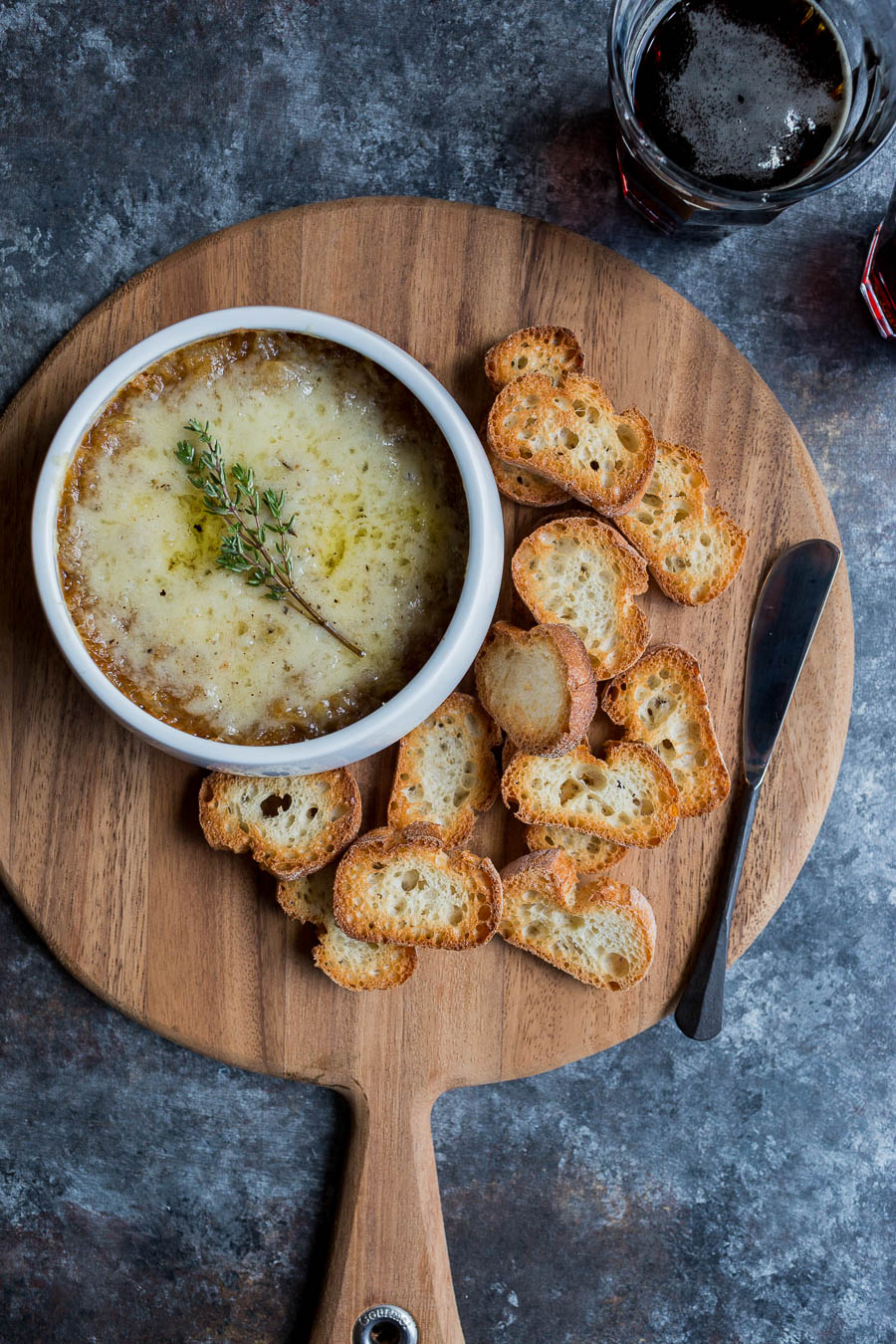 Besides the recipes, one of the things I really enjoyed in Lori’s book was one of the beginning chapters on the different styles of beer to use with the recipes.  This section really helped explain each beer to me in depth which is something I have been wanting to learn.  As I mentioned, I am often intimidated when it comes to ordering or buying beer, and after learning more about the different types, my mind was put at ease.  Lori writes about so many new to me beers such as barleywine or Chile beer that I am eager to really get out there in the new year and try them all.

I often use wine when cooking and am looking forward to trying many of the beer-inspired recipes in Food on Tap.  The chapters are broken down into recipes that are great for brunch all the way to beer-inspired desserts.  I only have had a chance to try a few of the recipes so far;  Pumpkin Ale Cheddar and White Bean Dip, Roasted Winter Squash Soup, and this recipe for Amber Ale French Onion Soup Dip.

Each recipe we have tried has been very different, but each one was also bursting with flavor.  I even tried the dips out on my picky family, and they loved it as well.  Each recipe uses a particular beer, but there are also recommendations for alternative ones to use which came in very helpful.  For instance, the first time I made the rich and creamy Pumpkin Ale and White Bean Dip, I was able to find pumpkin ale;  the second time was not so easy.  Thanks for Lori’s other beers to consider, I was still able to make it using an Anderson Valley ale.

I am really excited to get back into the kitchen and begin trying out some of the baking recipes in the book such as Blonde Buns, which I think will be great for a Super Bowl Bash.  Along with a batch of the Chile Beer Cast Iron Cornbread to serve alongside Lenny’s famous chili recipe.

Food on Tap is a cookbook that is full of recipes to whet anyone’s appetite, and each recipe is approachable and easy to make using an often overlooked cooking ingredient;  Beer!  I would definitely recommend this cookbook for any beer lover, and it will provoke them to think outside of the box when it comes to enjoying a beer. 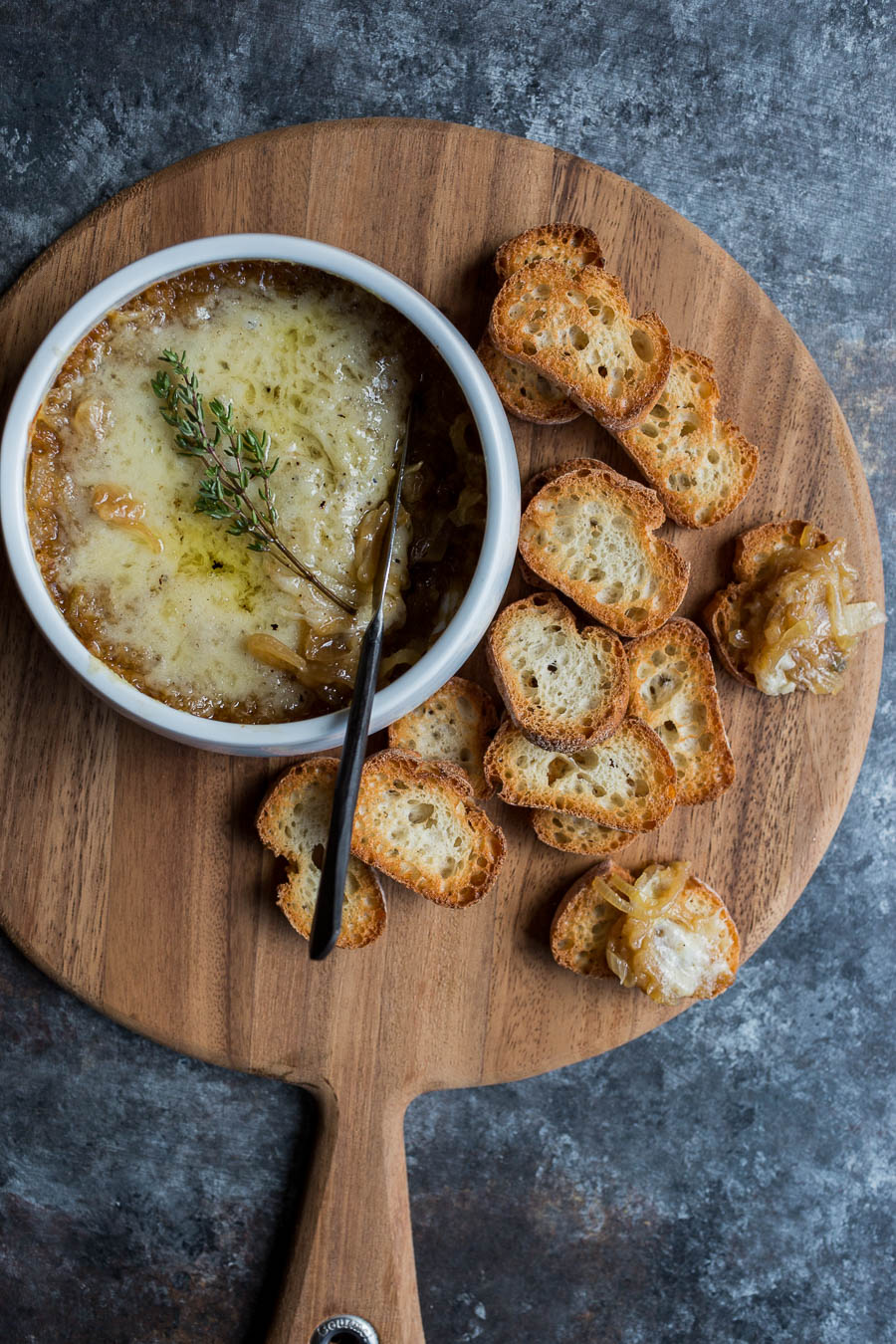 This recipe has become a favorite at Chez Us as we enjoyed it over Thanksgiving weekend a few times, as well we have enjoyed a few times at home. It reminds me of a creamy bowl of French Onion Soup and is not only rich in flavor but comforting.  It is loaded with caramelized yellow onions, bright thyme, and lots of gooey gruyere cheese.  While I could eat it by the spoonful, I do serve it with toasted baguette slices, but it also goes well with the suggested toasted rye.

You can head to Lori’s site Fake Food Free to purchase this must-have book for 2018!  While on her site, also check out her other amazing recipes.

Thanks so much for sharing about the book, Denise! I'm thrilled to hear that you liked the recipes and beer info. Such a gorgeous picture! Cheers!