This recipe came about when all I had left was mismatch of ingredients in the house. I like to think of it as the kind of the holding onto summer just a little bit longer taco recipe. Even though I dusted off the slow cooker to make this recipe for Slow Cooker Beef Short Rib Tacos, there is evidence of the last fragments of summer to be enjoyed. From using the last of summer tomatoes to the spicy jalapeños picked from our kitchen garden, it is truly a fresh taco recipe. 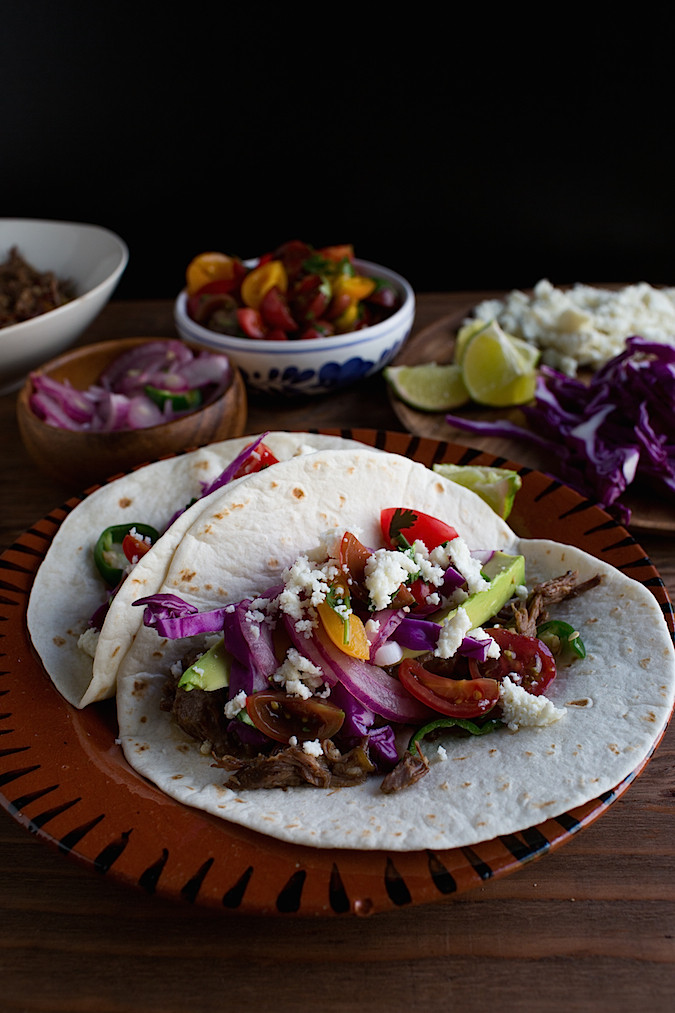 Last week as I set out to work on some new recipes, I got a hankering for some ribs.  At first, I thought I would merely defrost the beef short ribs I had in the freezer for a rainy day, and toss them onto the grill after a day of bathing in a marinade.  Then tacos crossed my mind.  With the conclusion of our guest posting extraordinaire for Taco Tuesday, I am on the look-out for new taco inspiration.  Thank goodness for a well-stocked pantry, and the previous run to the farmer’s market as we had a chance for some killer tacos.

I am embracing the slow cooker and trying new as well as old recipes when using it.  I have a feeling we may become good friends this winter.  This recipe was perfect for a slow cooker day.  Braised meaty beef short ribs were seasoned with lots of fresh onions, garlic, guajillo pepper as well as cumin before the slow cooking with a little dark beer.  Don’t worry if you don’t like beer you can use some beef stock.  The toppings were easy and seasonal;  pickled red onions, jalapenos and lots of fresh summer tomatoes.

Great way to say goodbye to summer, and hello to fall. 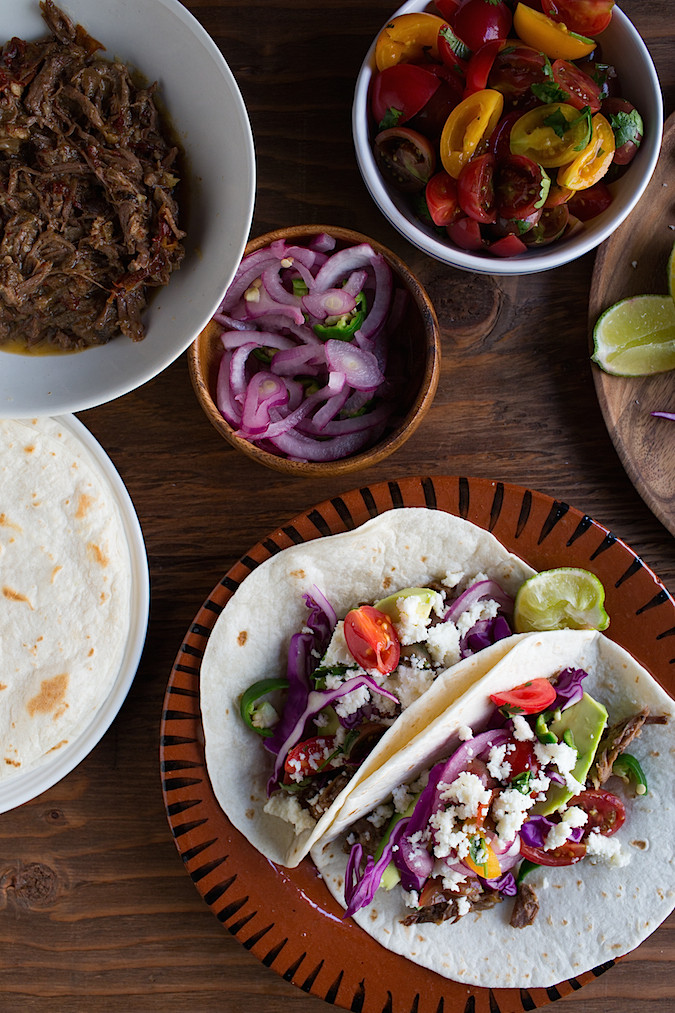 Place the ancho chili in a small bowl of warm water, set aside.
Combine the guajillo pepper, cumin, salt, and pepper in small bowl, and mix well.
Coat the beef short ribs with the guajillo pepper mixture and pat into the meat well.
Heat the olive oil in either the stove top insert to the slow cooker or in a large dutch oven. Add the beef short ribs in batches and brown well on all sides over medium heat. Remove the ribs and place on a plate.
Add the onions and garlic to the same pot and cook, stirring often until soft.
Remove from the heat. If you are using the insert, place into the slow cooker. If you are using a dutch oven, place all of the ingredients (onions, garlic, and ribs) into the slow cooker.
Add the beer, and stir gently.
Drain the ancho chili, slice in half, then add to the slow cooker.
Cover with the lid, and cook on low for 4 1/2 hours. Stirring occasionally.
An hour before serving, place the red onions, jalapenos and lime juice into a small bowl. Stir and set aside
Place the tomatoes, shallot, cilantro and a sprinkle of small into a small bowl. Stir and set aside.
Thinly slice the cabbage, and set aside.
When the meat is finished cooking, remove from the slow cooker. Remove the meat from the bones, using a fork shred the meat into pieces.
Warm the tortillas.
To serve, place some meat onto a tortilla then top with avocado, cabbage, onion mixture, and tomatoes, then a sprinkle of cheese. Squeeze a little lime juice over the top.
Serve.
Eat.

Thing only thing about a slow cooker is when you're wanting these bad boys fast! Thanks for the inspiration to put mine to use.

I wonder if this recipe will change my husband's mind about getting us a slow cooker (I want, he does not). He LOVES bbq short ribs and these looks and sound fabulous! I love the way you use them in tacos!