It rare that you will find fried food over at Chez Us.  Sometimes you just have to do it, and this recipe for Shrimp Po’Boy Tacos is good ole fried deliciousness.  Inspired by a recent trip to Louisiana when the Po’Boy seems to rule next to a crawfish boil.  Since I couldn’t find any crawfish to fill that Southern craving, I fried up some tasty shrimp and made some Shrimp Po’Boy Tacos. 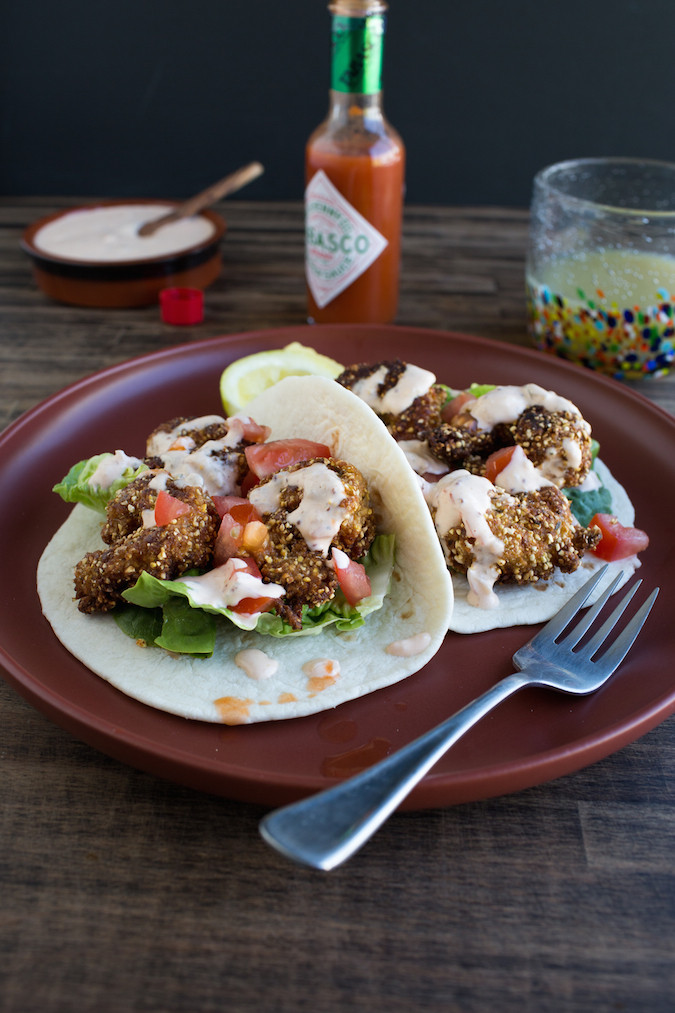 When I heard about a trip to Avery Island that a couple friends were invited on last year, I knew I had to get myself there, somehow.  Lucky for me, the fine folks at Tabasco invited me out in March, to experience a spicy good time.  Myself, along with other food and cocktail bloggers were guests of McIlhenny family at their old plantation mansion located on Avery Island.  Avery Island is a salt dome located about 150 miles from New Orleans.  It is a beautifully lush, wild island surrounded by marshes and swamps, old oaks draped with Spanish moss, and it is home to where Tabasco peppers grow. 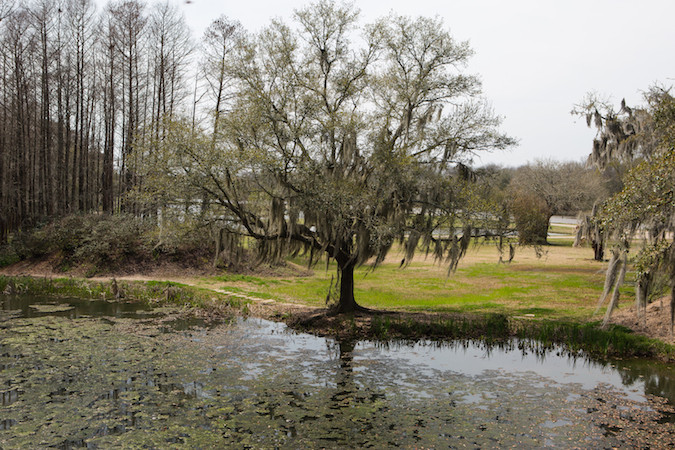 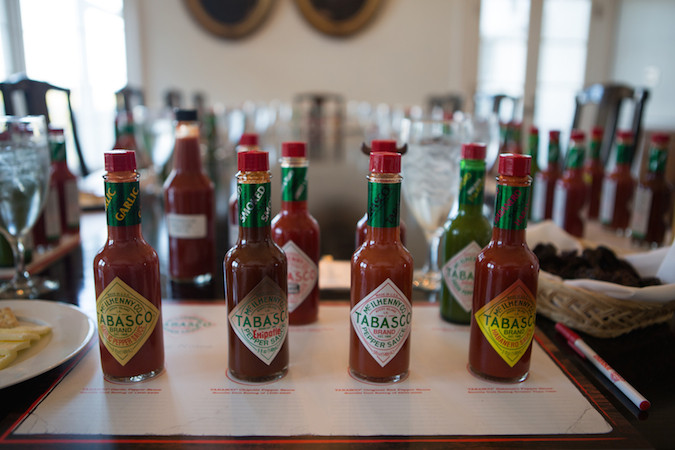 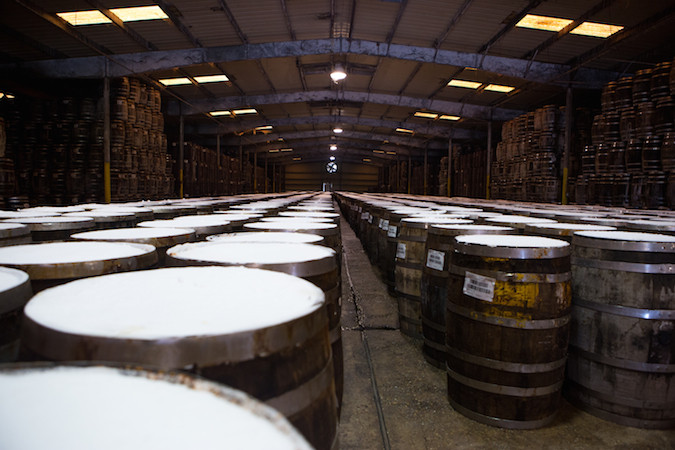 I went into this experience not expecting anything, but eager to know everything.  When I left, I was hungry for more.  And I still am.  My first morning, I awoke in the Guest House with my house companions for the next few days, David of 12 Bottle Bar and Sally of Taylor Takes A Taste, over coffee we acquainted ourselves with each other and laughed about how we were the “old house.” as the younger bloggers were placed in the Marsh house.  Which was fine as we plotted cocktails sipped on the veranda at the end of the day, made by our own private bartender, David.

Avery Island has a rich family history which was tangled in stories from the civil war and then combined in marriage between Edmund McIhenny and Mary Elisa Avery, who married in 1859 and had a family of eight.  After the collapse of the south, and Edmund losing his banking career in 1868,  Tabasco was founded.  Mr. McIlhenny, who was out of work took to his hobby of gardening.  He was given some pepper seeds, sowed them and began making pepper sauce.  He mixed the mature peppers with salt from the island and let the mixture ferment in crocks.  Afterward, he blended the mixture with vinegar and continued to let it age.  Once the peppers had finished aging, he strained the mixture, filled small bottles and sealed them in wax before selling.  He called his pepper sauce Tabasco which meant “place where the solid is humid”, and in 1870, he put a patent on this spicy sauce, and began selling worldwide.

146 years later Tabasco is still pretty much made the same way as Edmund McIhenny began making it.  Today the pepper mixture which is called mash is aged up to three years in oak barrels, and the vinegar that is used is a high quality distilled vinegar.  Tabasco is still made on Avery Island, and half of the company’s employees live on the island along with their families, who also worked at Tabasco. 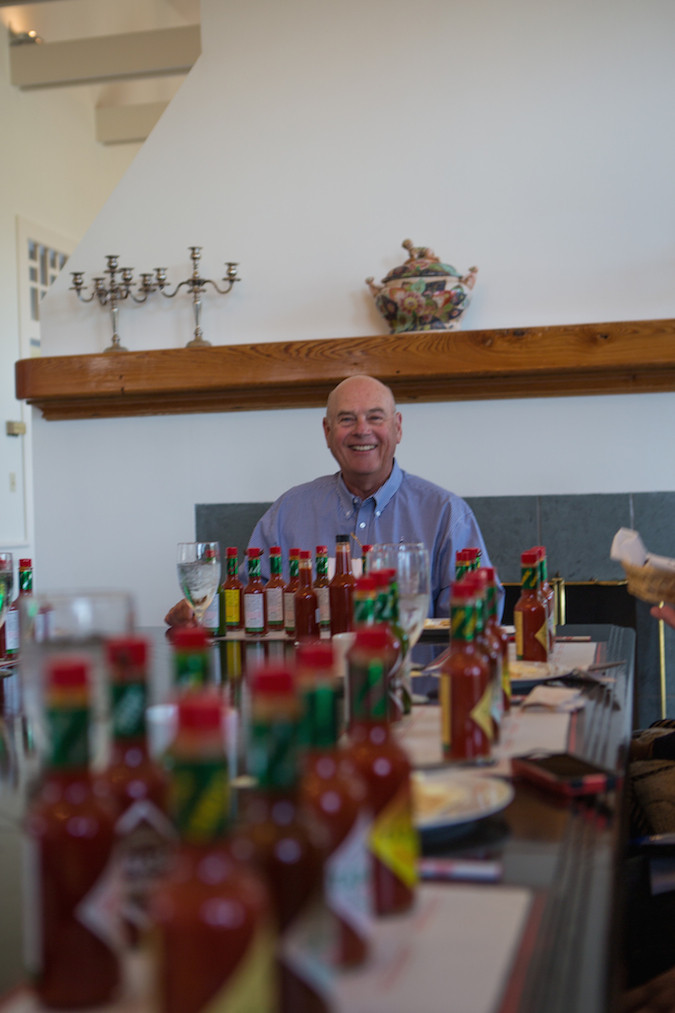 Over the course of two days Tony Simmons, CEO of Tabasco, walked us through the entire process from seedlings, to mash, preserving in barrels and finally the processing of the finished product.  I found it fascinating, and for me, the only thing missing was the actual harvest of the peppers.  One thing that I took away from seeing how this family run business operates, is that Tabasco is a sustainable business.  For over 140 years, they grew all of the peppers found in their 7 best selling products on the island.  In the 60’s the company was growing and needed to be able to make the product year round, so they began developing plots of land in Latin American countries.  Today 80% of the pepper mash is sourced outside of Avery Island, but the Tabasco peppers are still grown there.  The vinegar that is used is from Texas and Alabama, and the salt is from Avery Island.  The waste from the production of the sauce is still being used;  pepper skins and seeds are used as compost.  The old barrels that were used for aging are reused for up to 50 years, then broken down to build fences, tables and to make wood chips that are sold as a branded product.  One thing that resonated with me during my time on Avery Island was the sense of pride of being part of the Tabasco family, not only from Mr. Simmons but from every employee who worked or still works with the company. 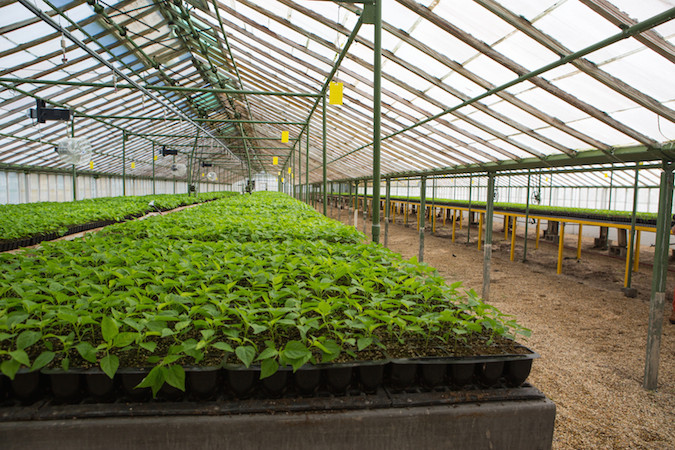 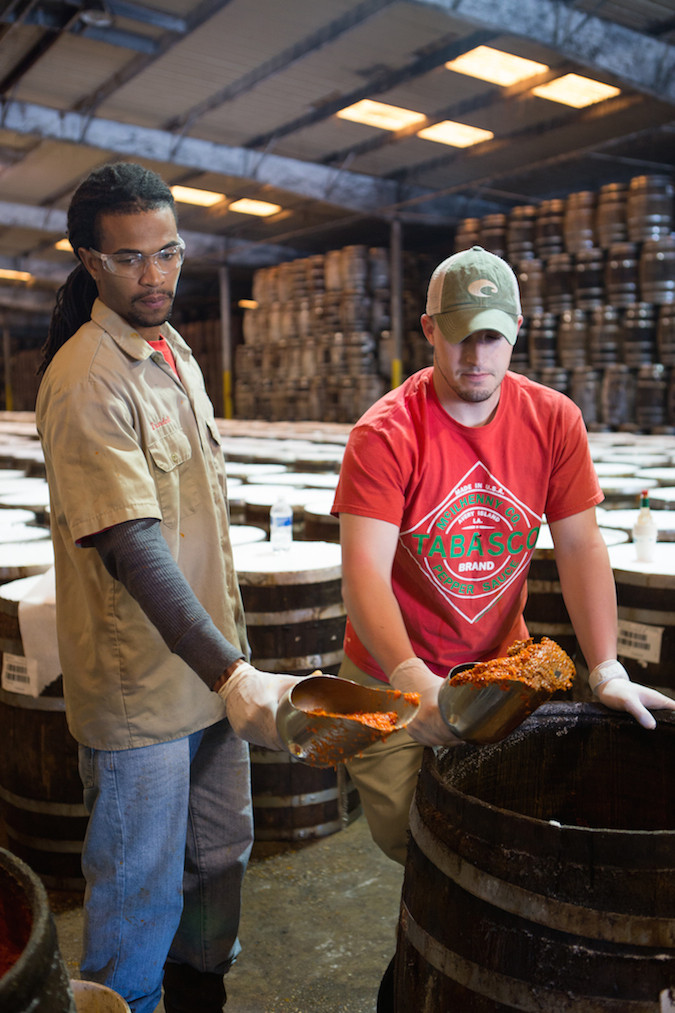 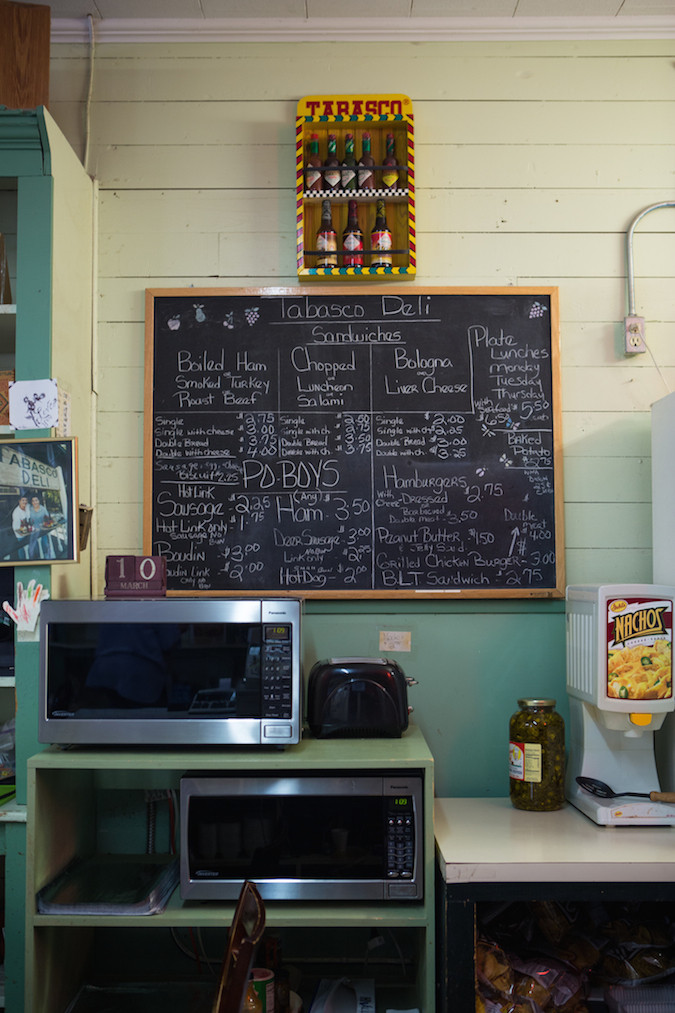 Today I am sharing with you only part of what I brought back with me from Avery Island, as well I am sharing one of four recipes that I have been hired to develop for Tabasco.  I wanted the first recipe that I shared to be Southern in a sense and to be from a fond food memory during my time there.  Po’ Boy sandwiches are found throughout Louisiana and are typically fried fish of some sort, smothered with a remoulade sauce, a little lettuce, tomato, and pickles.  I had an excellent shrimp Po’Boy at Bon Creole, it was my first one ever, and I still think about the perfectly fried shrimp stuffed into white bread.  It was outstanding! 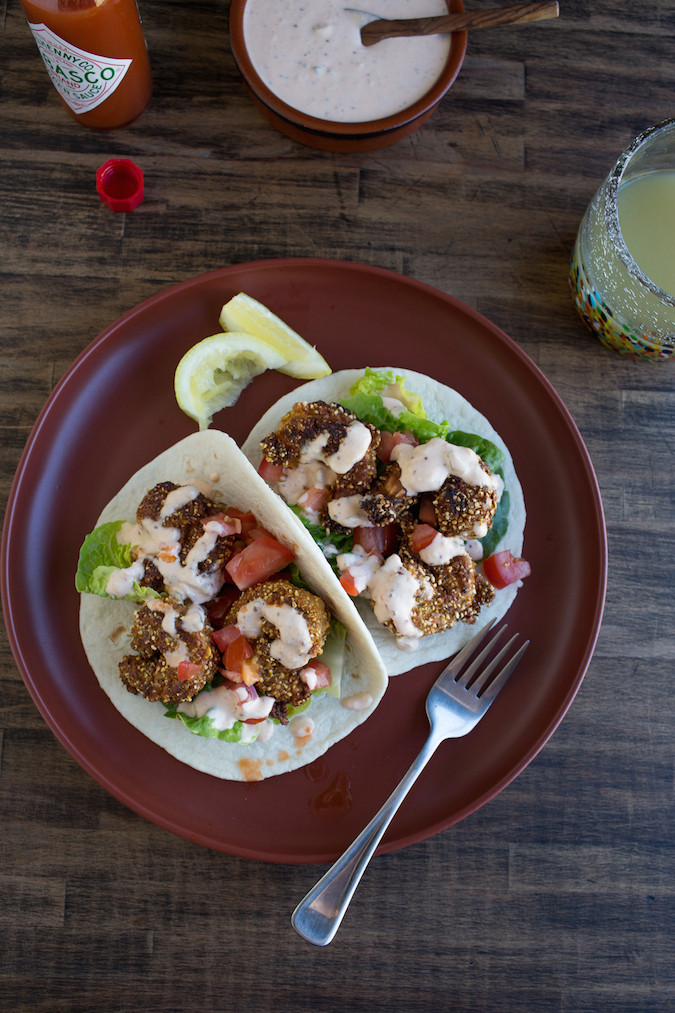 I took a traditional recipe and added a Chez Us twist by making Shrimp Po’ Boy tacos.  Perfectly fried shrimp seasoned with buttermilk, cornmeal, spices and a healthy dose of Tabasco, then layered with crisp lettuce, juicy pre-summer tomatoes on a flour tortilla before being smothered in a spicy remoulade sauce.  Just pass along more Tabasco and an icy cold beer or margarita.

You can check out more Avery Island/Tabasco photos here;  I am updating as I develop the recipe to go with the new set.  Stay tuned for three more delicious recipes, and more interesting tidbits on my trip to Avery Island. 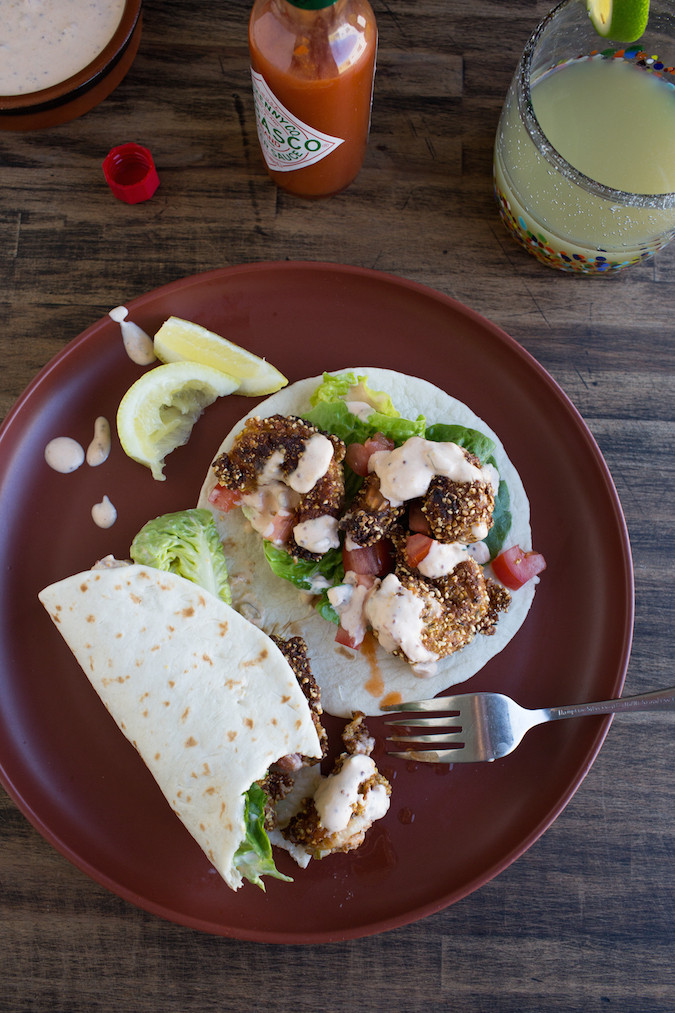 Disclosure:  Chez Us is proud to be a Tabasco Tastemaker.  This trip was sponsored by Tabasco, and we have been hired to develop recipes using their products.

You are officially dubbed the taco king and queen!

Sounds like it was a great time and these tacos look fabulous!

Looks great Denise! I am going to do this week.

These sound AMAZING! I love 'po boys and I love tacos. Win!