I have been having an outrageous love affair with these Spinach Balls.  These little nuggets of goodness are so good.  Honestly, I cannot get enough of them.  Sometimes when I find a new recipe I just keep making it over and over again, wondering how to make them better.  I can’t keep going as they are already perfect.  They are vegetarian and even the meat-lovers in your life will dig them. 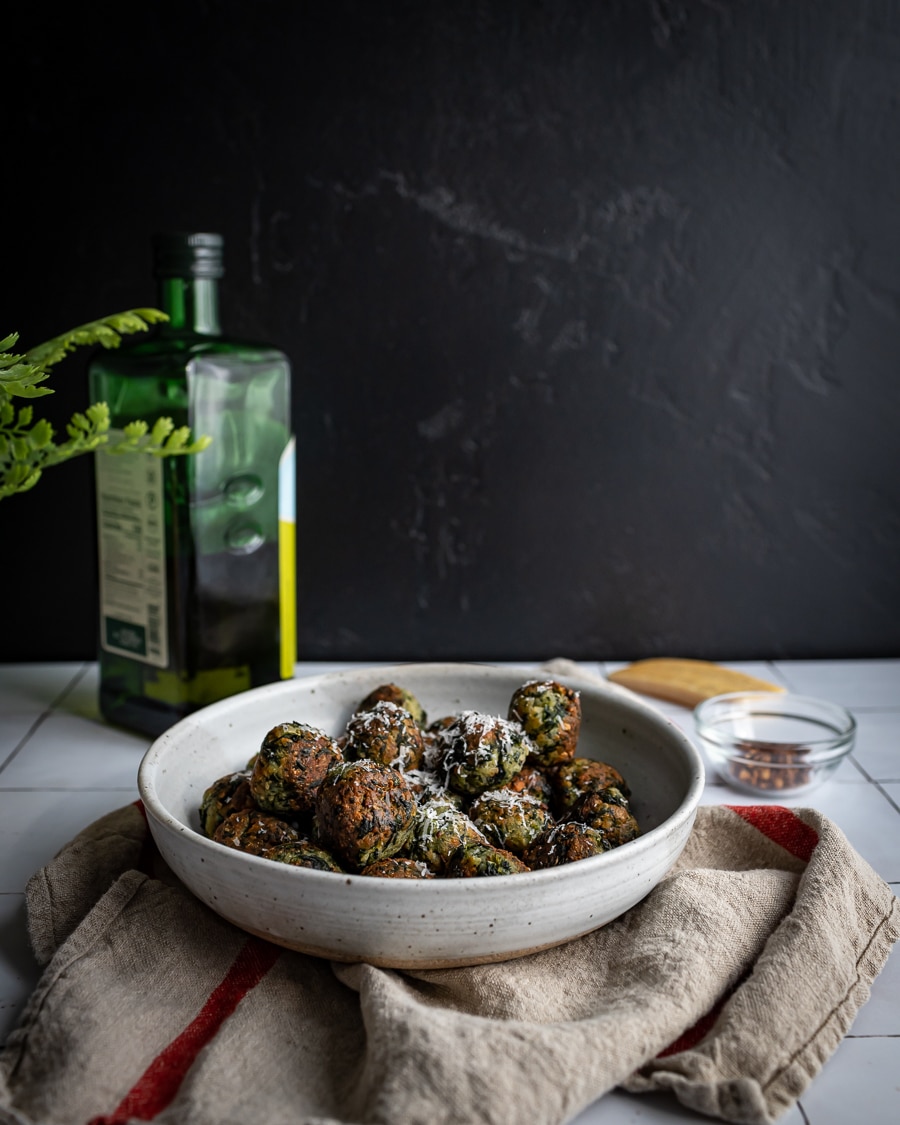 We have recently attended a cocktail party, and one of the tantalizing appetizers was spinach balls, which is the vegetarian version of a meatball.  Genius idea and why had I thought of it before?  I am usually the girl hovering over the cheese plate during a cocktail party, this time I was the girl hoarding the spinach balls.  They were so extraordinary that I really could not stop myself.

At that moment, I became acquainted with Antonio Carluccio, and his book the Collection.  Mr. Carluccio is an Italian chef from the Piedmont area of Italy, who relocated to the UK in the ’70s to work in the wine business.  In the 1990’s Carluccio and his wife, opened an Italian shop in London, called Carluccio’s.

Prior to opening the shop, Mr. Carluccio worked at Neal Street Restaurant, where Jamie Oliver worked under him.  Today, Carluccio’s has over 55 locations throughout the UK.  In addition to the cafe locations, Carluccio has written numerous cookbooks, and done a few series for the BBC.  The Collection is a beautiful cookbook, full of traditional Italian recipes.  I have only made this particular recipe as well as another;  but, can tell you, that these recipes are brilliant, and the cookbook is going to get a lot of use this year.  It is truly a special cookbook that has become a lovely addition to our home kitchen. 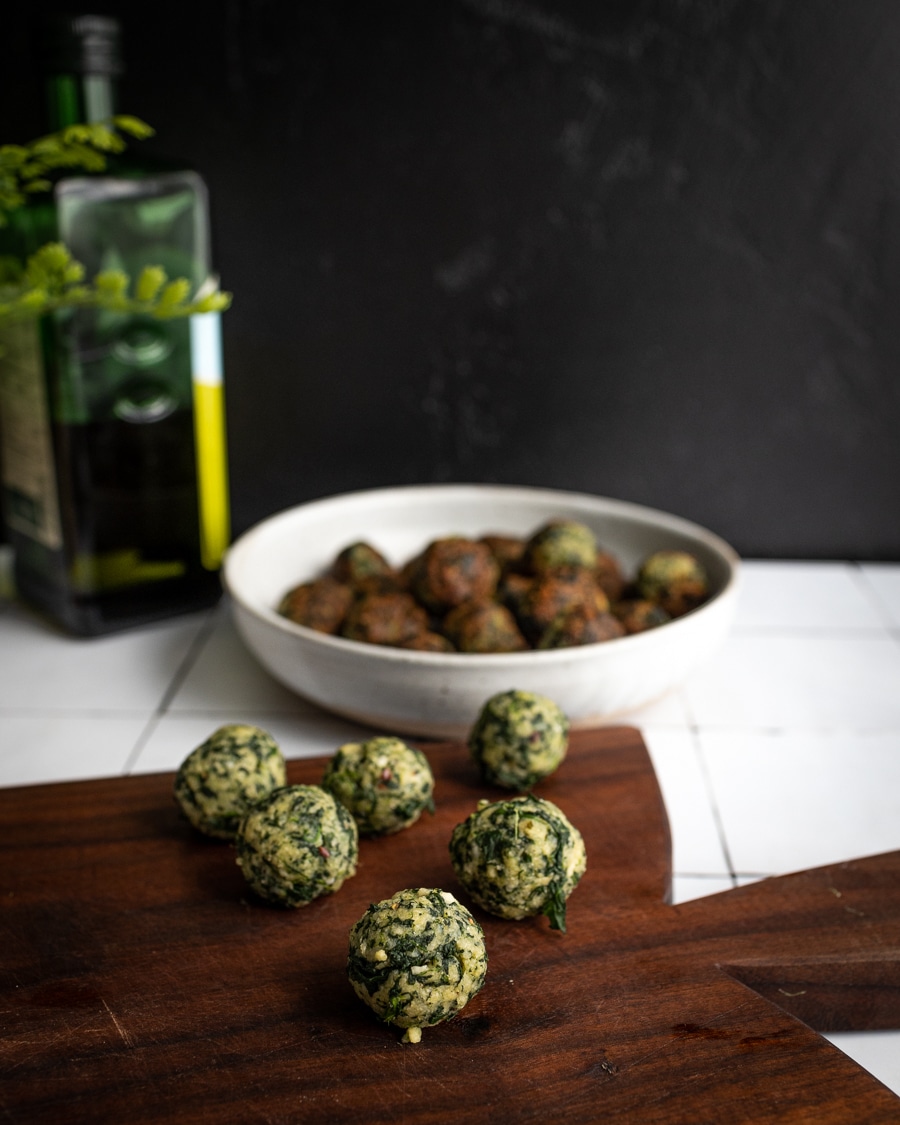 You are going to adore this recipe.  Simple to make, and easy to eat.  The balls are made out of a mixture of fresh spinach, breadcrumbs, and parmesan cheese.  I slightly adapted the recipe by using more spinach, less cheese, and panko.  Along with some fiery chili flakes.  Each ball came out perfectly light and bursting with flavor.  This recipe for Spinach Balls can be served two ways, either as an appetizer or as a main dish.  A perfectly light meal for Meatless Monday or for your next vegetarian inspired dinner party.

Bring a large pot of salted water to a boil.

Blanch the spinach for 2 minutes.

Drain into a colander.

Using your hands squeeze the water out of the spinach. Do this by taking about 1/4 cup of spinach into your hands and squeeze until no water runs from the spinach.

Chop all of the spinach with a knife. Do not use a food processor or you will have mush.

Beat the eggs in a separate mixing bowl.

Add about 1″ of olive oil to a heated shallow frying pan – over medium-low heat.

In batches, brown the spinach balls until golden brown; about 2 minutes per side.  I like to use a soup spoon to rotate the balls.

Remove with a slotted spoon or tongs, set aside on a paper towel.

can you give us a receipe for sauce without mayo.don't like mayo.

Jeanette, what type of sauce are you looking for? For pasta or salads? Thanks - Denise

Wow. So. Good. I'm pretty sure that my 2 year old (who thinks he's allergic to veggies in all shapes and sizes) ate half a pound of spinach tonight! I'm going to do a blog post on them in the next day or two - thanks so much for the recipe!! We'll definitely make this again!!

Thanks for the response, Denise! Going to try this for dinner tonight, really looking forward to it! Will let you know how it turns out!

Could you use frozen spinach with this recipe?

Jenn, you can use frozen spinach. Be sure to thaw it out, rinse with cold water and drain really well. I use cheesecloth, wrap it up inside and twist and squeeze until no water is left. Let me know how it works for you. We love this recipe. ~ Denise

Thank you for showing me this one! I'll be trying it soon! =D