I have been on the fence all day about what post to share with you today.  Originally I was going to share Friday Happy Hour;  but, we are working on a series of posts for cocktails and want to nail down one before sharing.  Next Friday.   I decided it was time to share something gooey and sweet that you could enjoy over the weekend.  You still have time to start the recipe for old-fashioned cinnamon rolls to enjoy tomorrow or Sunday. 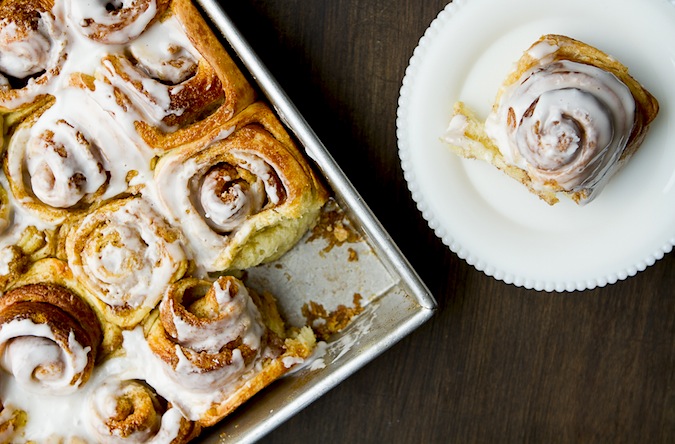 We have been tossing around the idea of doing some entertaining in the near future;  which we are loving now that we have a dining room.  Yeah, dining room!  Halfway through some menu planning I started thinking about how we don’t have to always just do dinner.  What about brunch?  In order to be better prepared I thought I would up our brunch recipes and create some delicious ones to have on hand when the craving for a friendly brunch pops up. 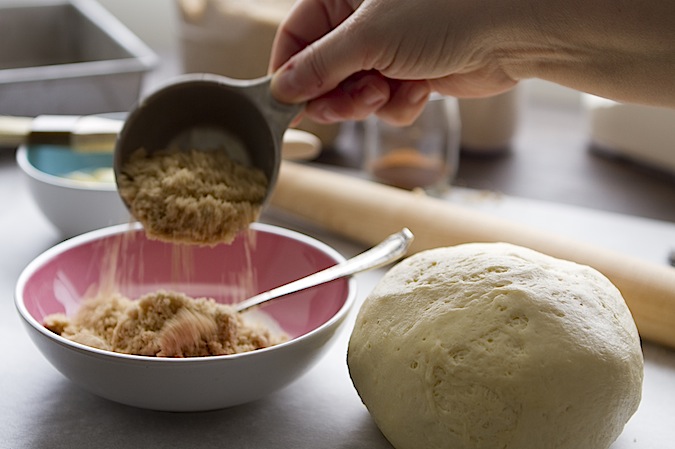 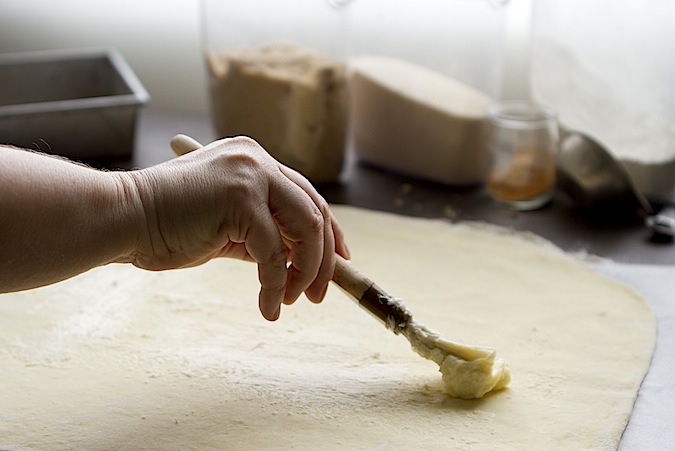 Smearing the butter on

Remember the hot and buttery Golden Brioche?  Well, I got to thinking about them the other day, and I turned them into zesty cinnamon rolls.  The brioche recipe works perfectly as a base for cinnamon rolls and even sticky buns as it is light and fluffy.  I thought about changing up a traditional cinnamon roll recipe by adding nuts or other exotic spaces;  but, then I took a step back.  What about good old fashioned cinnamon rolls.  Sure bacon, maple, honey, jello flavored cinnamon rolls may be fun but sometimes comfortable and easy food is even better.  These are old-fashioned cinnamon rolls full of butter, sugar, and cinnamon with a simple powdered sugar glaze. 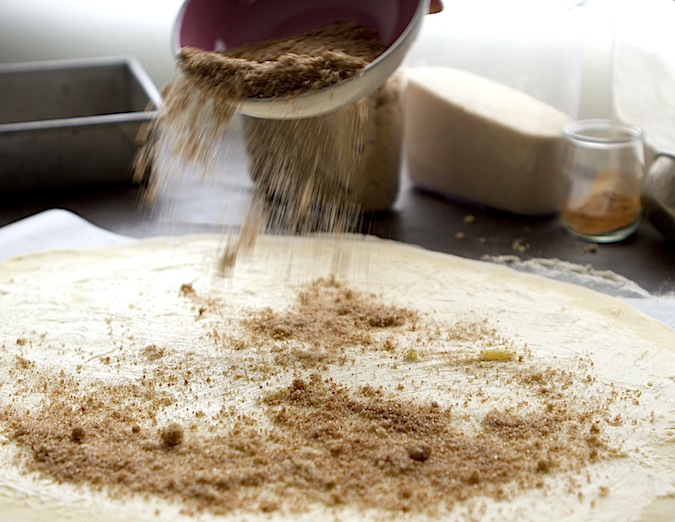 Sprinkle on the sugar 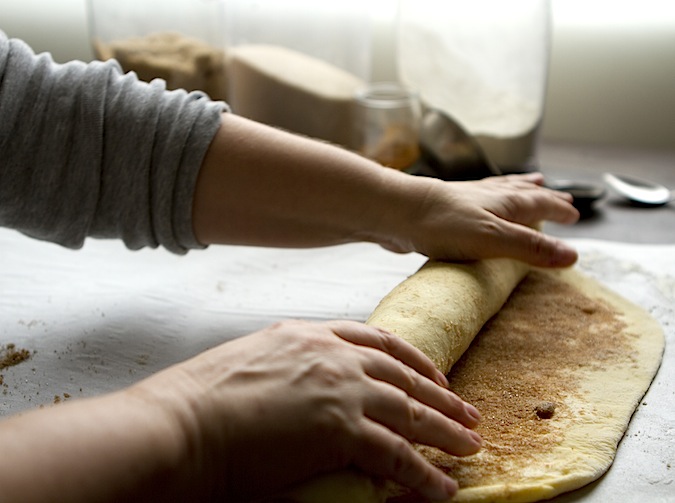 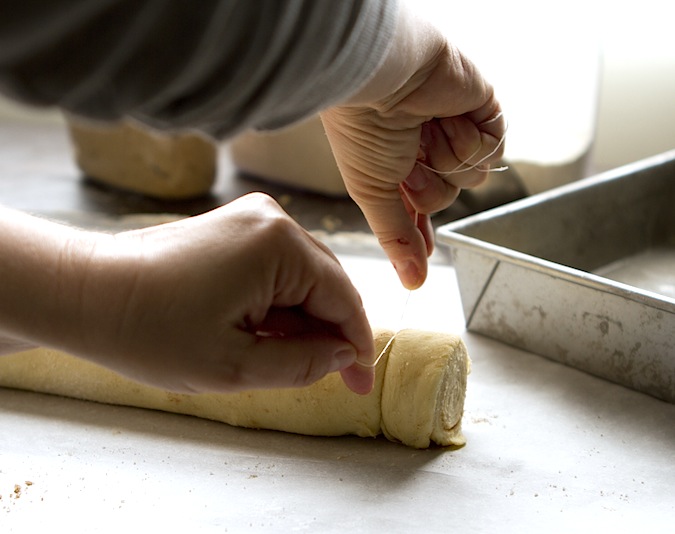 * Make the full brioche recipe.  I used half of it for cinnamon rolls and baked a gorgeous loaf of bread with the other half.  Or really indulge and bake two batches of cinnamon rolls. 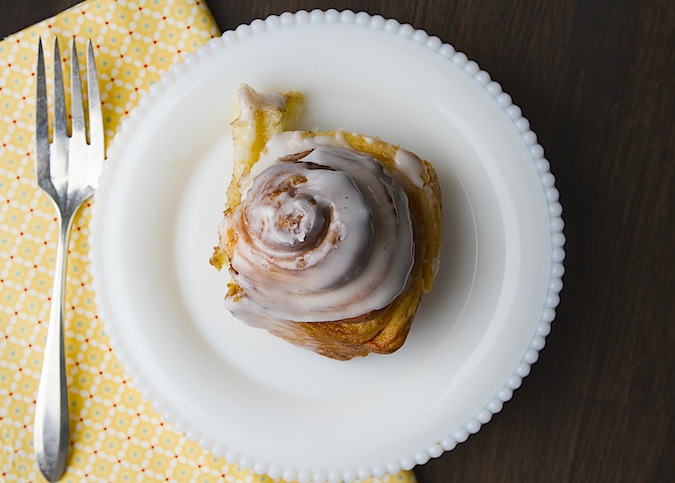 Prepare the brioche according to directions.

The next day when ready to bake hot cinnamon rolls, heat the oven to 350.

Melt half of the butter and pour into a small bowl.

Put the other half of the stick of butter into the bowl and gently mash with the back of a spoon.

Roll out half of the dough onto a lightly floured (and clean) surface into a large rectangle about 2/3" thick and 14" x 12".

Using the same pastry brush spread the butter mixture over the top of the dough; use as much or as little as your want. I try to use all of it; after all, these are "cinnamon" rolls.

In another small bowl combine the sugars and the cinnamon, mix with a fork. Sprinkle over the top of the dough.

Starting at the smallest end, roll tightly, into a log.

Using a long piece of dental floss, loop under the log of brioche, and crisscrossing and cut into 1/2" thick circles.

You can cut the rolls into larger circles if you want bigger rolls.

Put into the baking pan, just until touching, don't cram in.

Cover with wax paper and then drape a couple towels over the top of the wax paper.

Set aside in a warm room and let rise until doubled; about 45 minutes - 90 minutes.

Remove from the oven.

Sift the powdered sugar into a small mixing bowl.

Stir in the milk.

Using a spatula, spread the glaze over the warm cinnamon rolls.

Make the full brioche recipe.  I use half of it for cinnamon rolls and then baked a gorgeous loaf of bread with the other half.  Or really indulge and bake two batches of cinnamon rolls.

Pro Tip - use unflavored dental floss to get the perfect cut roll every time.

Did you make this recipe?

Thank you for joining us at the Chez Us table. We truly love having you here.Have you made this recipe?  Please share what recipes you are enjoying from Chez Us. We would love to see and be able to share with our followers. Use the hashtag #chezuseats on your social media channels, then we can pull a chair up to your virtual table and share with our friends.

It seems like we're in sync with food these days, from quick and simple tacos to brioche cinnamon rolls. I was just thinking of making the latter after making some pretty amazing brioche with a recipe from Tartine. I'll be making some as soon as we finish off our Nutella scones.

These look so amazing!

Alison - amazing they are. I wish I could eat them everyday but my hips won't let me! ~ Denise

These cinnamon rolls are gorgeous and perfect for having people over for brunch! I've been wanting to make cinnamon rolls for a good, long time, but all the recipes I've seen feel a bit to snazzy in some way (with cream cheese or pumpkin or chocolate). When I'm ready to make some, I'll definitely choose this recipe :)

I felt the same way when starting the recipe. I wanted to go back to the basics; so many people feel the need to jazz good basic recipes up with bacon fat or triple brie jello frosting ... sometimes comfort food is good food.