We are not big sliced bread eaters.  Though you will definitely find many baguettes making their way into our little kitchen.  The reason we aren’t into sliced bread is because we haven’t found any that really makes us want to eat a whole loaf.  You know the kind, warm, slightly yeasty with a great crust as well as a tender crumb.  That is until we discovered this Golden Brioche recipe from Dorie Greenspan.  It is perfect on it’s own or used to bake cinnamon rolls or to make a sandwich.  The possibilities are endless. 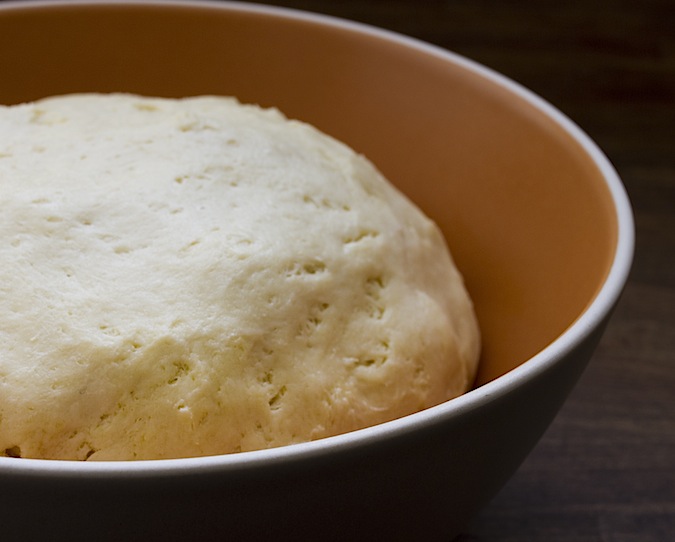 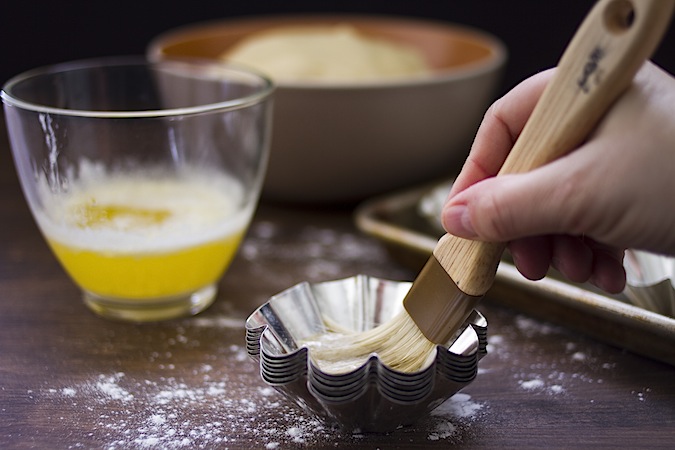 Recently, Lenny was listening to NPR, when Dorie Greenspan came on.  He anxiously called in, to chat with Ms. Greenspan about my obsession with Tuesdays with Dorie, and how he had to put a stop to it because he has no self-control.  Dorie sounds just as adorable as I imagine her in person.  It was great fun listening to them chit chat;  I was a bit envious!  During that conversation, I suddenly had the urge to bake.  It has been forever since I participated with TWD, and since I have been given the big boot out of the club, I bake on my own these days. 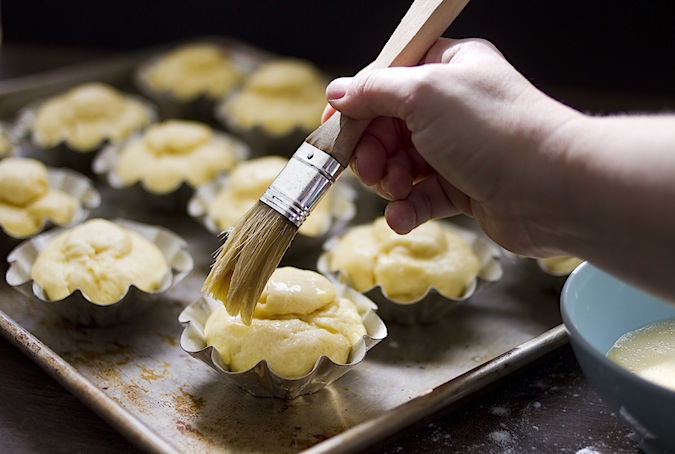 We had some delicious homemade nutella laying around the house, and I knew that the only thing that would go perfectly with it was hot out of the oven brioche.  I turned to my trusted baking book and flipped through all the sweetness until I found what I was hungry for.  I, love Dorie’s recipes, as they are always right on.  If the recipe says it will take 2 days, it will take two days.  If it says it will feed 6 people, it will feed 6 people.  You will always hear me preach about how this is the one basic baking book everyone should own.  It’s true. 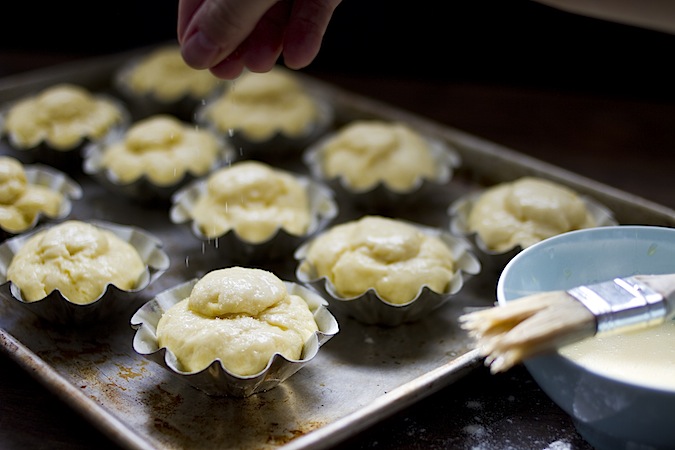 Back to the brioche.  This is a great recipe.  The dough is silky and buttery.  The crumb is perfect;  not to lose nor too tight.  The flavor is slightly yeasty and not overly sweet;  perfect for sandwiches.  Dorie’s recipe makes 2 large loaves.  I decided to use the adorable brioche pans I brought back from Paris.  The recipe made a dozen mini brioche and two small loaves.  The amount was perfect as the minis barely lasted two days, and the loaf was nearly gone by the third day.

Lucky, for us, I was able to sneak a loaf into the freezer before someone gobbled it up.  For the record, that someone was not me.  The only other change I made to the recipe;  I added a healthy dose of fresh blood orange zest and a sprinkling of lemon sugar (only on the minis).  You can only imagine how wonderful the bread smelled while baking.  Can’t you?  The citrus undertones went really nicely with the Nutella.  I can say with certainty this will become our new “sliced” bread over at Chez Us.  Perfect toasted and perfect on its own. 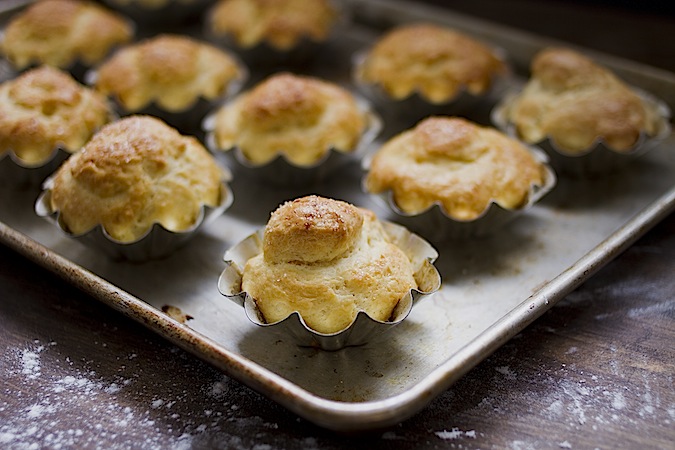 Recipe submitted with permission from Dorie Greenspan. The dough needs to be made 1 day ahead and then shaped and baked the next day.

** the dough should e made 1 day ahead and then shaped and baked the next day.

Put the yeast, water, and milk in the bowl of a stand mixer and, using a wooden spoon, stir until the yeast is dissolved.

Add the flour and salt, and fit the mixer with the dough hook.  Toss a kitchen towel over the mixer, covering the bowl as completely as you can – this will save you and the kitchen from being showered in flour.

Turn the mixer on and off in a few short pulses, just to dampen the flour, then remove the towel, increase the mixer speed to medium-low and mix for a minute or two, just until the flour is moistened.  At this point you will have a fairly dry, shaggy mass.

Scrape the sides and bottom of the bowl with a rubber spatula, set the mixer to low and the eggs, followed by the sugar and the orange zest (if using zest).

Increase the mixer sped to medium and beat for about 3 minutes until the dough forms a ball.  Reduce the speed to low and add the butter in 2 tablespoon size chunks, beating until each piece is almost incorporated before adding the next.  You will have a dough that is very soft, almost like a batter.  Increase the speed to medium-high and continue to beat until the dough pulls away from the sides of the bowl, about 10 minutes.

Lightly butter another bowl and transfer the dough to it, cover with plastic wrap and leave at room temperature until nearly doubled in size, about 40 – 60 minute, depending on how warm your room is.

Deflate the dough by lifting it up and around the edges and letting it fall with a slap into the bowl.  Cover the bowl with plastic wrap and put it in the refrigerator,  Slap the dough down in the bowl every 30 minutes until it stops rising, about 2 hours, then leave the covered dough in the refrigerator to chill overnight.

Pull the dough from the fridge and divide it into 2 equal pieces.  Cut each piece of dough into 4 equal pieces and roll each piece into a log about 3 1/2 inches long.  Arrange 4 logs crosswise in the bottom of each pan.  Put the pans on a baking sheet lined with parchment or a silicone mat, cover the pans lightly with wax paper and leave the loaves at room temperature until the dough almost fills the pans, 1 to 2 hours.

Center a rack in the oven and preheat the oven to 400.

Beat the egg with the water.  Using a pastry brush, gently brush the tops of the loaves with the glaze.

Bake the loaves until they are well risen and deeply golden, 30 – 35 minutes.  Transfer the pans to racks to cool for 15 minutes, then run a knife around the sides of the pans and turn the loaves out onto the racks.  Invert again and cool for at least an hour.

Follow step 9 above, but divide the dough into two halves;  one half for these minis and the other half for two small loaves.  Or use the dough for only minis.  If you are like me you would have to bake a dozen, then repeat.

Butter 12 3 1/2 inch wide brioche pans.  Divide the half into 12 equal pieces.  Follow these instructions on making your mini brioche, from step 6 – 9.  After brushing with the glaze, lightly sprinkle with sugar, if you desire.

Let cool in the pans for 5 minutes, then remove the brioche to a wire rack to finish cooling.

" Bread should be like sex; you want more and more!" hysterical! Exactly how I feel about baguettes though... These brioche loaves look fantastic! I love Dorie Greenspan and pretty much all of her cookbooks, I would be envious of him too if I were you (for the record, I listened and do remember hearing that, haha) :)

Oh I've been eyeing Dorie's book for a while and checked it out at the library recently, will def. put it on my wishlist now. How cool that Lenny chatted with her! Your brioche looks wonderful, and so does the Nutella. Yum.

We hope you will join us on our culinary capers as we share the food we love to cook. Pull up a chair, and stay awhile, and remember, “Food isn’t meant to be perfect, it is meant to be shared.”
Skip to Recipe