I have made a version or two of paella at home and even camping, over the years.  I did not really enjoy authentic paella until a trip to Barcelona.  We could not get enough of the paella and devoured a few pans over the course of a week.  When Culinary Collective reached out to us about making paella together, we said YES!  It was a no-brainer as we have been itching to get back to Spain, and figured if we couldn’t do that, we could recreate one of our favorite dishes at home, Paella Valenciana. 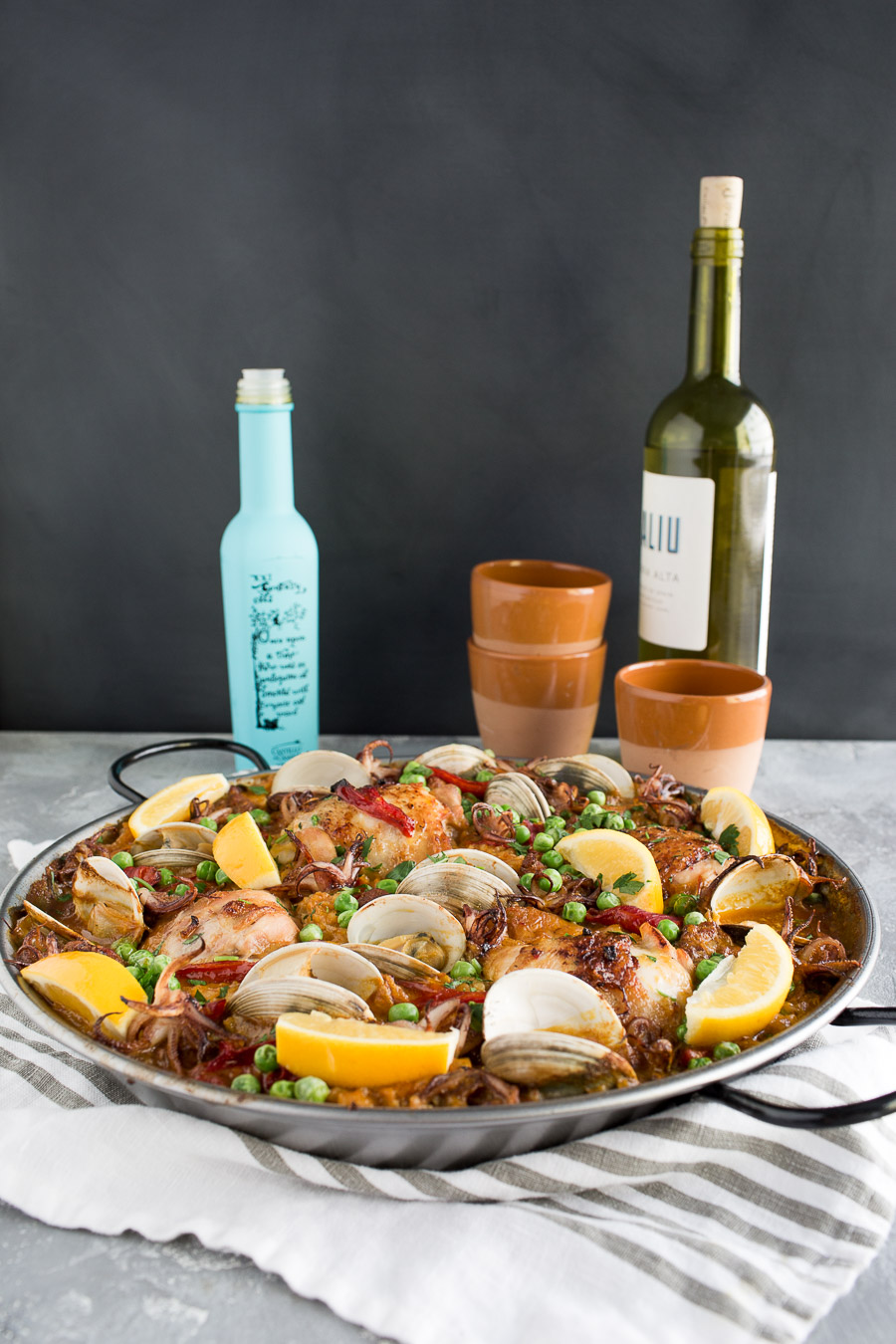 This recipe was developed in partnership with Culinary Collective.

While I mentally prepared for a new recipe to share, I wasn’t quite sure until our Paella making kit arrived at our home, exactly what sort of paella I would make.  The ingredients we received from Culinary Collective were Valencian Paella Cooking Base, Matiz Valencian Traditional Rice, a jar of Matiz Navarro Organic Piquillo Peppers, and the perfect sized paella pan to make just enough paella for 4 – 6 people!  I knew I also wanted to incorporate a couple items we brought back from Spain, and lucky for you and us, Culinary Collective sells them.  I was terribly excited to begin cooking, and all that was left was to pick up a few fresh ingredients from the market!

What I loved about paella while we were traveling was the sense of community when enjoying it.  There is something magical about a steaming pan of seasoned rice filled with seasonal ingredients being brought to your table to enjoy together.  Everyone would grab a fork or spoon, and just begin to experience.  People smile, eat, laugh and enjoy each others company while eating paella, it is a very communal experience.  There are so many different types to enjoy as well, from heavy seafood influenced to vegetarian options loaded with fava and green beans, peppers and strips of kale.  Some recipes are cooked in traditional ovens while others were cooked over wood fires, all were different but the same.  Our favorite was always the traditional Paella Valenciana which was filled with lightly fried rabbit and many different kinds of seafood and smokey peppers. 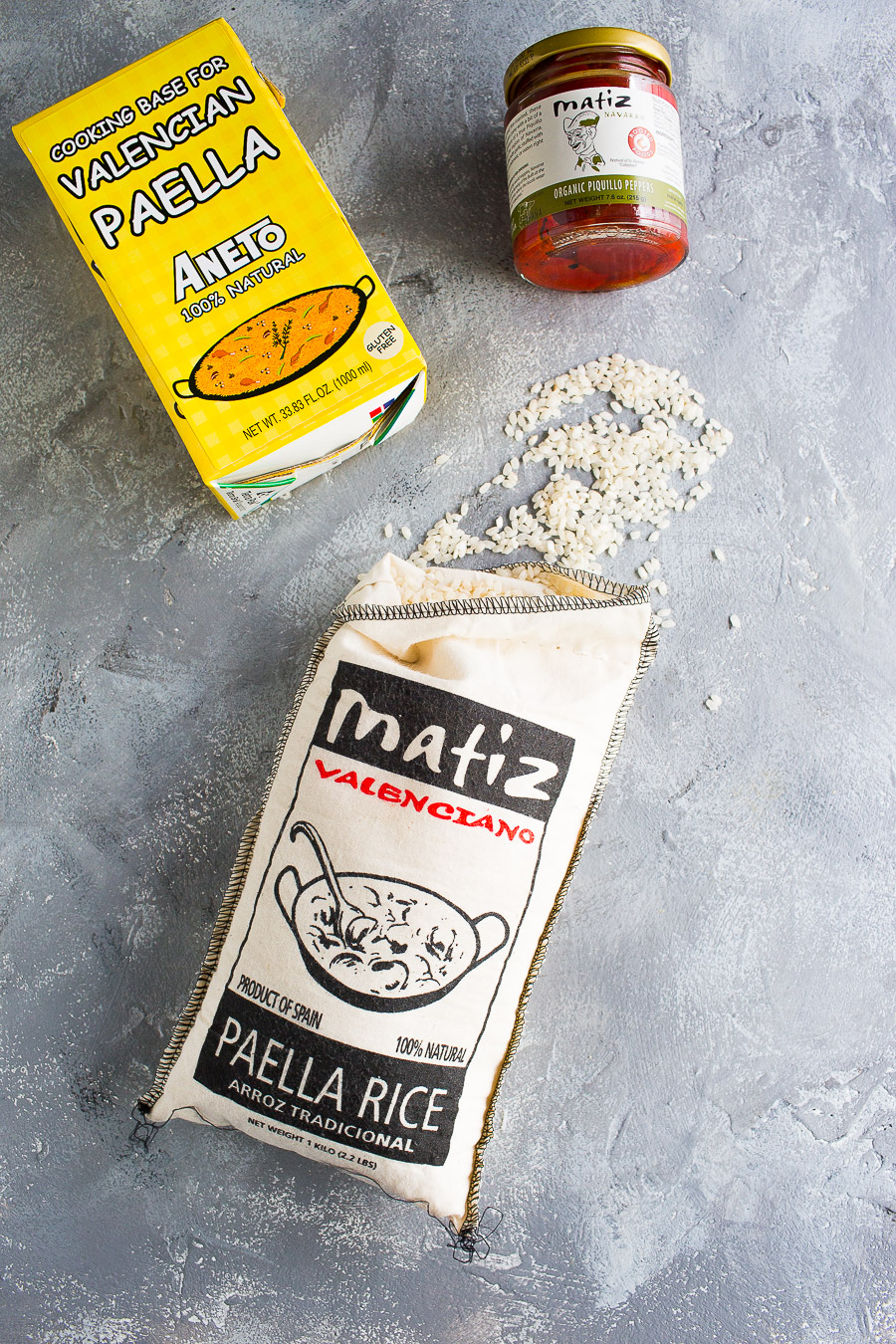 Since I could not find rabbit locally, I opted for chicken thighs and cooked them until golden brown.  I also added some spicy pork chorizo which I lightly cooked to release some of the juices, then I sautéed the squid (only the tentacles as we prefer them) in it.  I only cooked the rice with the broth and the golden chicken thighs on the stovetop until the rice was barely soft.  Then I added rest of the ingredients and finished cooking in the oven until the rest of the ingredients were almost cooked, then I scattered with frozen peas and continued cooking for a few more moments. 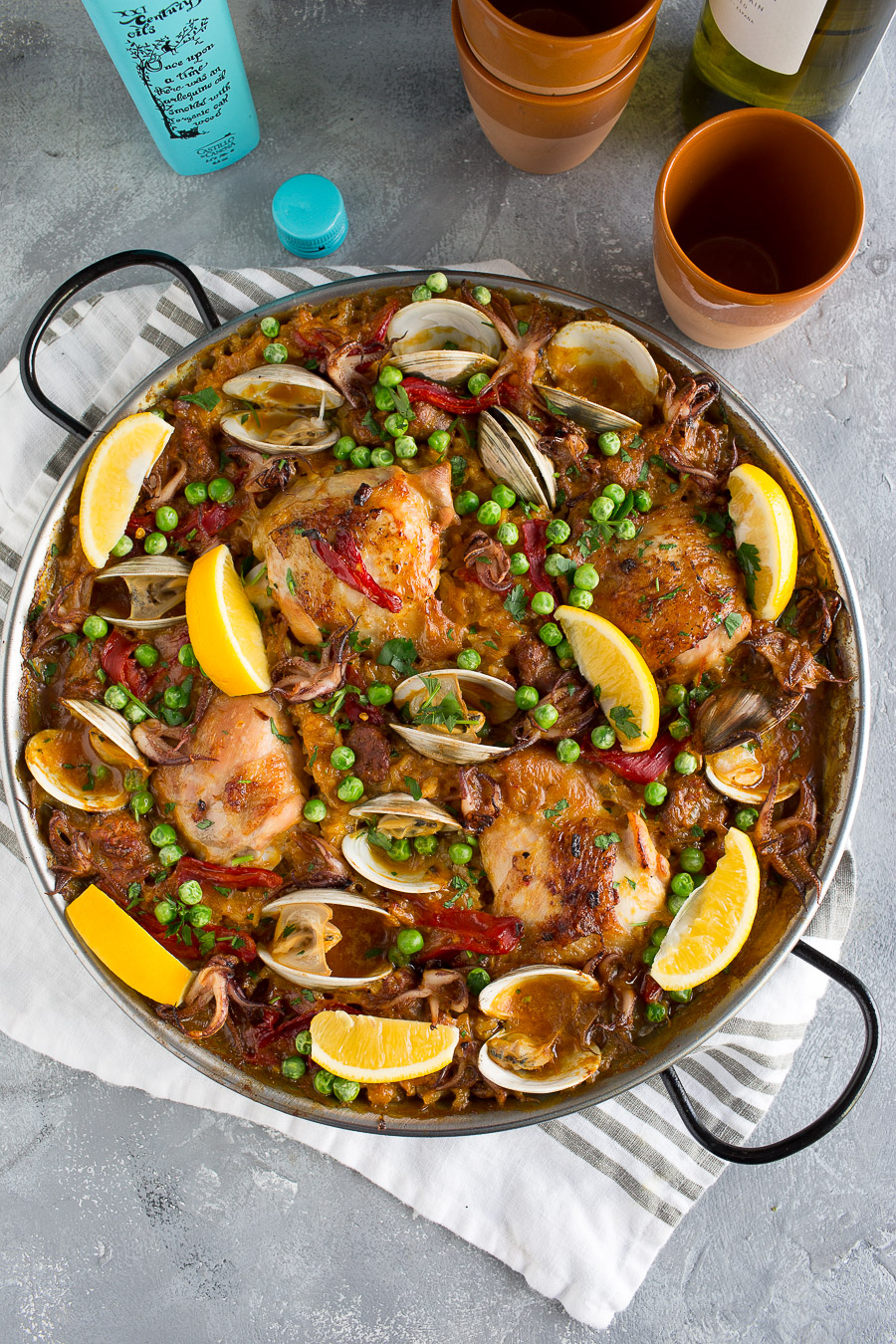 This recipe for Paella Valenciana is a great meal any time of the year, but I cannot wait to make it again on the grill and enjoy it at many summer soirees! 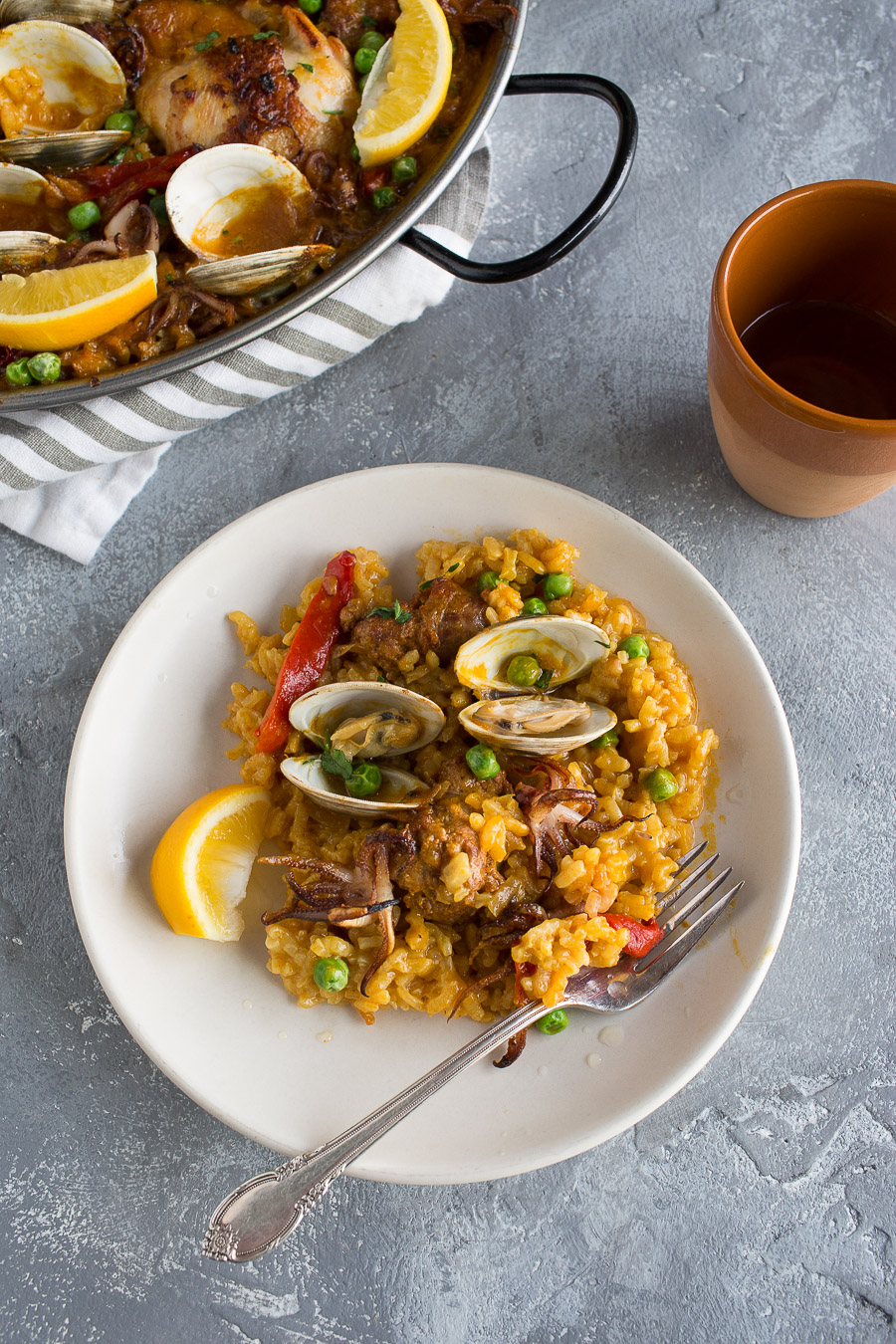 Place the paella pan on a stove over medium-low heat.
Pour in the olive oil.
Add the onion, stir and cook until soft; about 3 minutes.
Turn down the heat to low, add the garlic and saffron. Stir and cook for 1 minute. Place into a small bowl.
Add the chorizo, stir and cook over low heat until lightly golden; about 5 minutes. Stirring often. Remove and place into a small bowl.
Season the chicken thighs with salt and pepper then place into the paella pan over medium-low heat. Lightly brown until golden on both sides. Remove and place onto a plate.
Add the squid to the paella pan, stir and cook for 2 minutes over low heat. Remove and place into a small bowl.
Add the Aneto base and the white wine to the paella pan and bring to a boil.
Preheat the oven to 400.
Stir in the rice and reduce the heat to low. Place the chicken thighs and chorizo into the rice and continue cooking for 15 minutes until the rice is slightly tender.
Add rest of the ingredients, except the peas, lemon, parsley, and Castillo de Canena Smoked Olive Oil.
Place into the oven and bake for 22 until the rice is cooked and the liquid reduced.
Sprinkle the peas over the top of the paella and cook for another 5 minutes.
Remove from the oven and let sit 5 minutes.
Sprinkle with the parsley, arrange the lemon slices and drizzle lightly with some of the Castillo de Canena Smoked Olive Oil.
Serve.
Eat.

Paella with mushrooms, cuttlefish and artichokes

Disclosure: This post is sponsored by Culinary Collective.  Thank you for supporting the brands we love and believe in, which makes Chez Us possible. All opinions are always 100% our own.  To find some great Spanish ingredients head over to Culinary Collective.  You can also find them on Facebook, Twitter, Pinterest, and Instagram.

Wow. It looks delicious. I love it. So, I will try to make it. Your recipe will help me. Thanks for sharing your recipe.

Sorry to say that this is not a Valencian paella... Valencian paella does not have any kind of fish or seafood. Also never pot chorizo or... wine? And what about Pimientos del piquillo or green beens? definitely, I'm sorry but it is not a paella from Valencia. You can call it "My own paella" "My personal recipe for a paella" or "Paella with..." but never Paella Valenciana. In fact, most Valencian pepole will call it "Rice with things". I recommend you to follow Wikipaella initiative. It's hard to read good Valencian paella recipes into Internet, I found this one: paella-recipe.co.uk