Not your typical Taco Tuesday post.  This recipe goes against all my beliefs of a good taco, which does not typically include all of this gooey cheese.  If you have had tacos in Mexico, you know what I mean.  That being said, I had to do it as the cravings were hard.  I am glad I did because this recipe for Three Bean Taco Casserole is outstanding.  Super easy to make and even easier to eat! 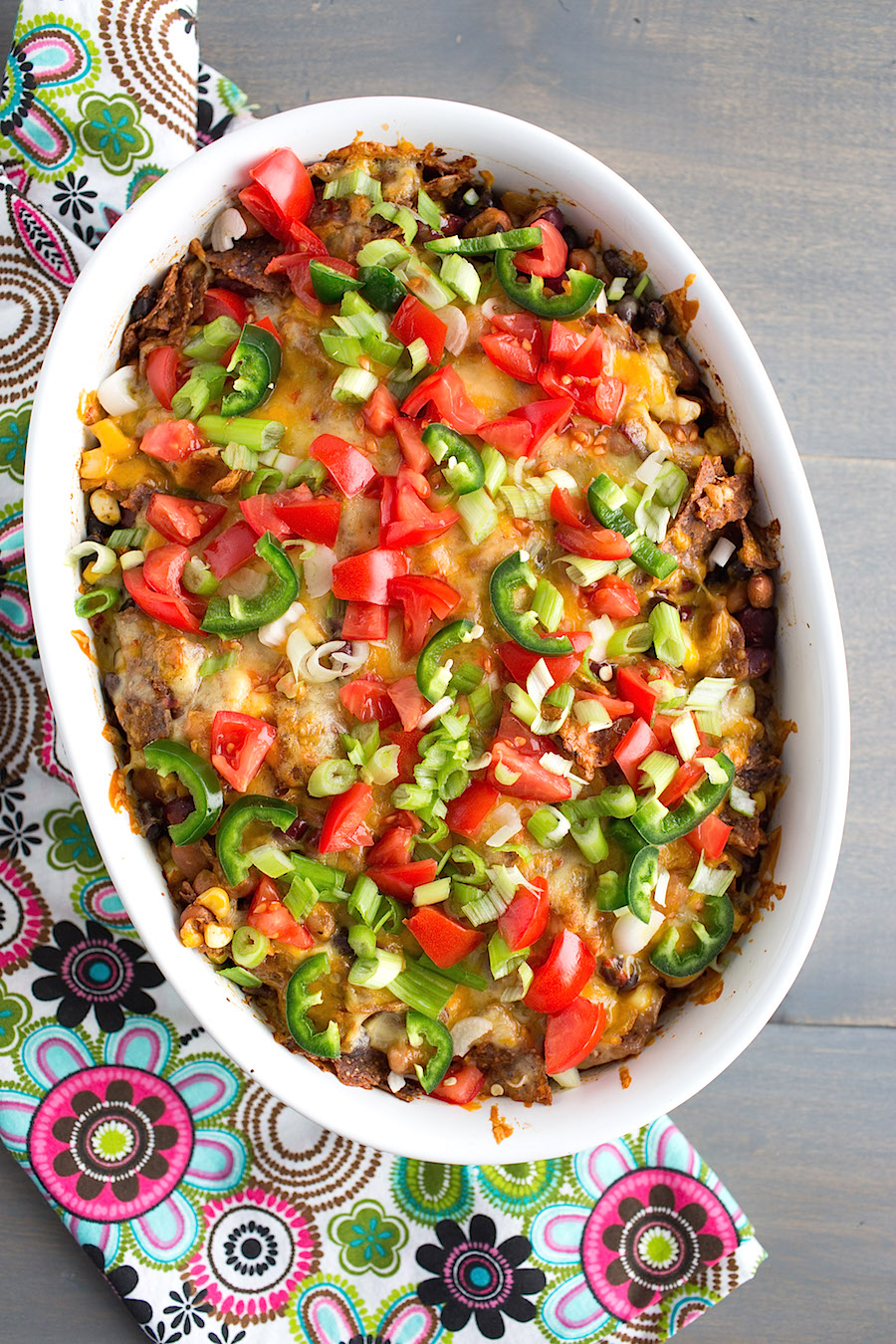 I was having a food conversation with a fellow foodie friend the other day which drifted off to the One-Pot Meal craze.  Doesn’t it seem like everyone and their brother is writing about these one-pot meals as well as casseroles?  Or is it just my Pinterest account that has exploded with them?  Really what is the difference between a one-pot meal and a casserole?  I cannot really tell the difference.  So, when I mentioned that I was working on being a follower and making a casserole recipe she was surprised.

I don’t remember eating a lot of one-pot or casseroles growing up.  Occasionally, being a kid of the 70s, a Hamburger Helper would show up on the table.  Or even a tuna casserole as well as this taco casserole that came from a box.  In all honesty, that taco casserole was not too bad from what I remember.  It just didn’t happen too often at our home. 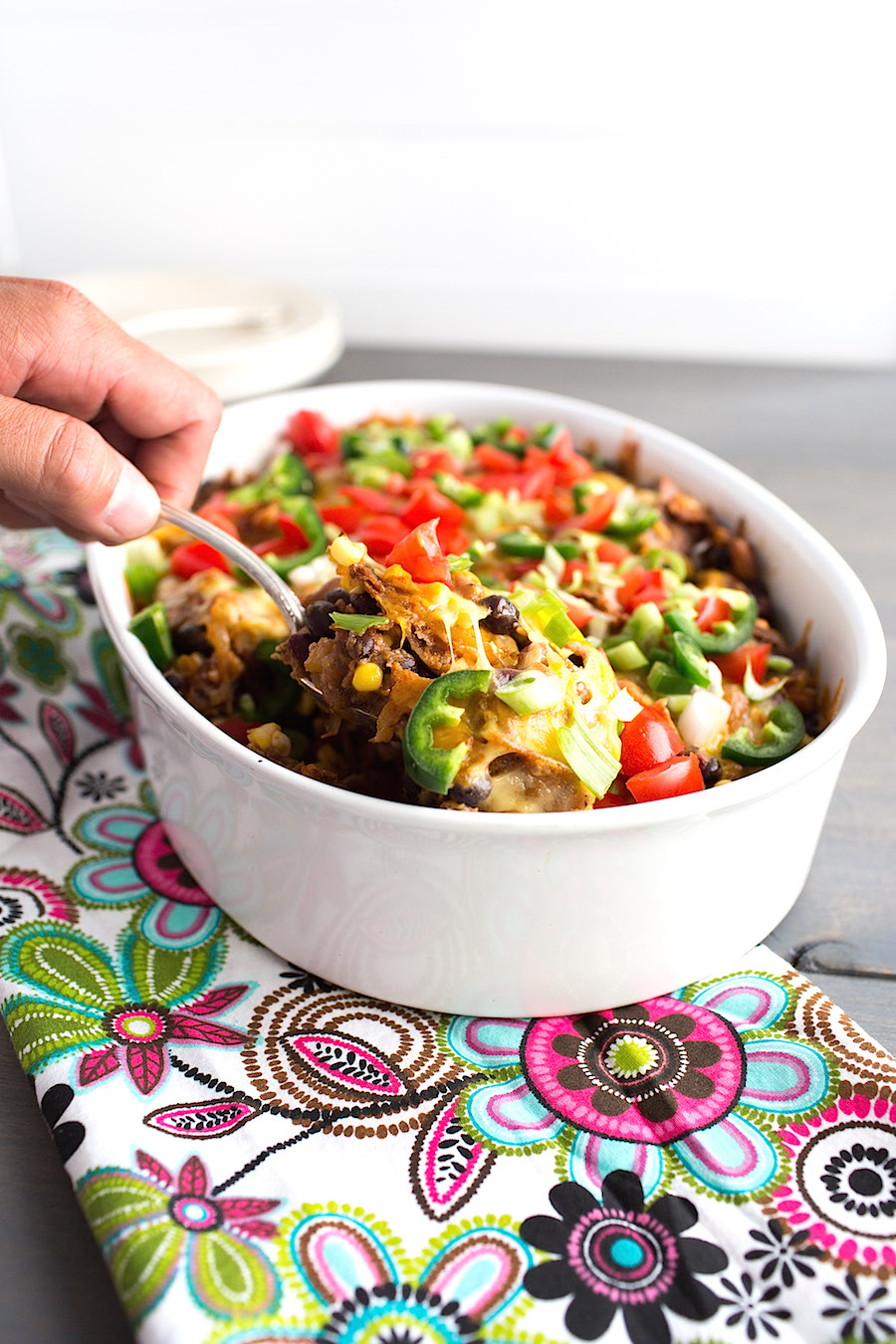 I didn’t use a box for this recipe but I did take a few shortcuts.  I used a taco seasoning from the Rick Bayless line, which I have been loving this summer as they are perfect for quick meals.

I admit I did use a box of crispy taco shells as I didn’t want the added sodium from tortilla chips.  Okay, if I am honest I also used canned beans as I didn’t want to precook three different types of beans.  Using these shortcuts made this a quick and easy casserole meal.

I also used fresh corn but you could use frozen if you thaw it out and let drain until all the moisture is released.  A little sauteing and chopping of the garnishes and that was all it took.  Quick and easy meal on the table in no time, well in 45 minutes if you count prep and cooking.

Preheat the oven to 375.
Drain the beans into a colander and rinse well. Let sit in the colander to dry.
In a large frying pan heat the olive oil over low heat, then add the onion. Stir and cook until soft about 3 – 5minutes.
Remove the kernels from the cobs of corn, then add along with the onions. Stir.
Toss the beans and the sauce into the onion/corn mixture. Stir and cook for 1 minute over low heat.
Lightly oil the large baking dish with some olive oil.
Gently mix the broken tortillas and 1 cup of the cheese mixture, along with the beans, then pour into the baking dish.
Scatter the remaining cheese over the top and cover with foil.
Place into the oven and bake for 20 minutes.
Remove the foil and bake for another 15 – 20 minutes until the cheese is melted and lightly bubbly.
Remove from the oven and let sit for 5 minutes.
Sprinkle the tomatoes, jalapeños and green onion over the top.
Serve.
Eat.

What sauce gets added? I dont see it in the ingredients list but it is mentioned in the directions

Hello Lindsay, the sauce that we used was the Rick Bayless skillet sauces. Feel free to use your favorite enchilada sauce as well.

I guess I will make it my self at home, that casserole will make my table amazing

Sometimes it is an excellent idea to go "easy," especially if you end up with a casserole like this. Yum, Denise!

I'm a bit of a taco purist myself, but I do have a special place in my heart for casseroles. I would definitely take a big scoop of this for lunch today!