Leave it to our friend, Jenni, to come up with a drool worthy dessert taco.  She has definitely taken Taco Tuesday to another level.  We met Jenni of Pastry Chef Online, at our first MIXED CON event, and she was an utter delight;  we instantly hit it off, and became more than blogging friends.  Jenni has over 20 years of experience in the kitchen, and studied Patisserie and Baking at culinary school 16 years ago.  She spent time working as a pastry chef in fine dining restaurants before deciding to start Pastry Chef Online and begin teaching people how to cook and bake. This gal is all about techniques that can be used across the board with different recipes, and always our go-to spot when stuck or looking for new baking inspiration.  You can find Jenni on Twitter, YouTube, Pinterest, Flickr, Instagram and G+. 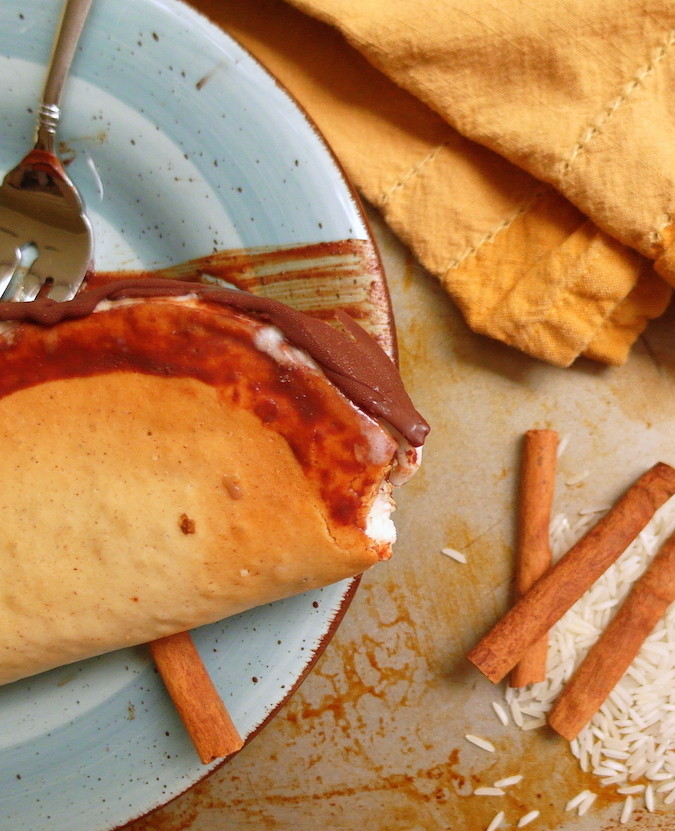 I am so thrilled to be here at Chez Us writing a guest post! Hi, everyone!  And thank you Denise and Lenny for inviting me to share on your website while you’re off adventuring!

I have been a fan of Taco Tuesday here on Chez Us from the outset. I am inspired by all the different variations on the theme that Denise and Lenny share, and I’m honored to make my contribution today.

Chez Us fans and readers, I have a special treat for you. Denise told me that it’s a good idea to have weekly series so readers have something to look forward to, and in honor of her Taco Tuesdays, I started Ice Cream Tuesdays where I make a new ice cream and post every week over on my site. I have so enjoyed coming up with creative flavor combinations.  This week, I have turned my Ice Cream Tuesday into a Taco Tuesday dessert taco for you to enjoy! 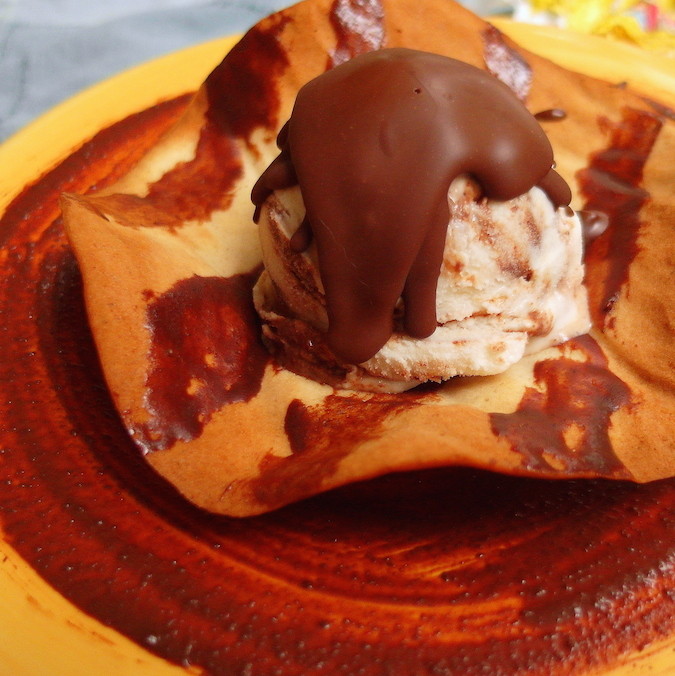 I knew I wanted to go with Mexican flavors, and I had a lot of thoughts about what direction to go in. I even asked folks on my fan page and got a ton of great ideas. In the end, I decided to do what I think of as a traditional American ice cream, vanilla fudge swirl, with a Mexican twist.

The vanilla part is horchata–perfumed with basmati rice, Mexican vanilla and cinnamon, and the fudge swirl is a concentrated Abuelita, or sweet Mexican hot chocolate drink, that has just enough texture to it to contrast with the creaminess of the horchata base. The shells are standard tuiles, based on David Lebovitz’s recipe, to which I added a touch more salt and some cinnamon. And because I cannot leave well enough alone, I also made a “magic shell” coating with bittersweet chocolate and coconut oil flavored with chipotle powder and cinnamon.

The resulting taco is pretty dreamy, if I do say so myself. The horchata ice cream is cool and smooth. The taco shell stays crisp, and the hints of spice in both the swirl and the magic shell all work together to say “Mexican dessert taco!”

Enjoy, everyone. And enjoy the rest of your adventures, Denise and Lenny!

**. this recipe has so many moving parts that it is hard to make a print option.  Highlight, copy and paste onto a blank word doc or page, then print.

For the Taco Shells
I used David Lebovitz’s recipe and procedure, adding an additional pinch of salt and 1/2 teaspoon of cinnamon.
I don’t have a waffle cone maker, so I just spread the batter out with an offset spatula as per his instructions. I traced a 6″ circle on parchment paper and then turned the paper over so I would have guidelines. I formed the shells by pressing the circle down around the back of a wooden spoon until they were cool enough to hold their shape.

For the Horchata Base

For the Abuelita Swirl

For the Magic Shell

Putting it all together!

If you don’t want to make tacos, simply layer the ice cream base and abuelita in a container. Press plastic wrap
directly on the surface of the ice cream, put the lid on, and then freeze until firm, 4-6 hours or overnight.
Let temper for about 5 minutes on the counter before scooping and serving.

Oh my goodness, Jenni! These look fabulous! I love your ice cream twist on tacos :)

I totally need to make this on our Taco Tuesday - this would be the perfect dessert to end the day! Awesome guest post!

You are going to like her, you really are! But what if she's not my type? Oh, she totally is!

Then Taco Tuesday met Ice Cream Tuesday. And they realized that they had more in common than just the same last name.

I hear wedding bells, don't you? And I think they'll be serving tacos and ice cream at the reception!

So happy you guys asked me to guest post over here! One note for anyone wanting to make this ice cream. The recipe for the Abuelita Swirl makes a ton more than is necessary for the swirl. I still suggest making the entire amount. Then you can use the leftover as a sauce (ooh, a dipping sauce for your taco!) or mix it 1 part sauce to 3 parts hot milk to make hot chocolate.

Hope you guys are enjoying your vacation!