When I made this recipe I was dreaming that I was in Italy.  The flavors in this recipe for Italian Style Lamb Belly will definitely take you on a quick trip.  It is no secret that I love Lava Lake Ranch lamb and this is the meat I used in this recipe.  Lamb belly is a rich and flavorful cut of meat that pairs perfectly with Italian herbs, jammy sundried tomatoes, and crisp parsley. 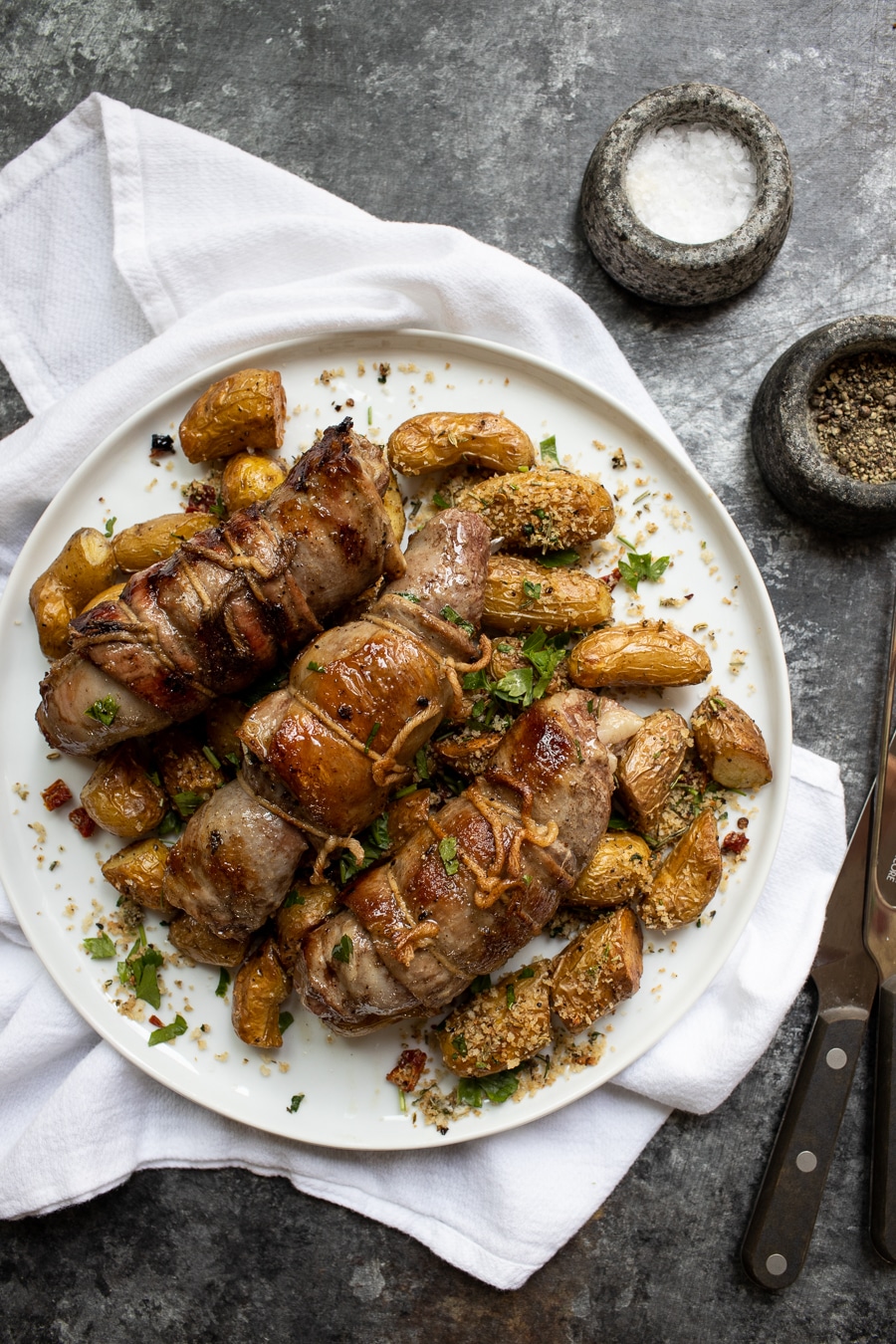 I often write about how traveling has a big influence in how I cook.  The past month I have been wishing that I was in Italy, and most of the meals I have cooked have been inspired by this food-centered country.  It has been a while since I have been there but one thing I remember is the fresh ingredients along with subtle seasonings as well as the way food was prepared.  Meat and bread cooked over open fires or sauces slowly simmered on the stove for hours.  The one thing that each meal has in common is the fresh ingredients.  Lava Lake lamb is so special that I knew I wanted to use care with creating this travel-inspired recipe.   Porchetta kept coming to mind as I tossed around recipe ideas.  I knew I wanted to enjoy a recipe with similar flavors.  Meat being basted by its own fat and roasted until golden brown. Potatoes, the thought of them roasting in the lamb fat had me drooling before I even started so it was a must-add for this Italian Style Lamb Belly recipe. 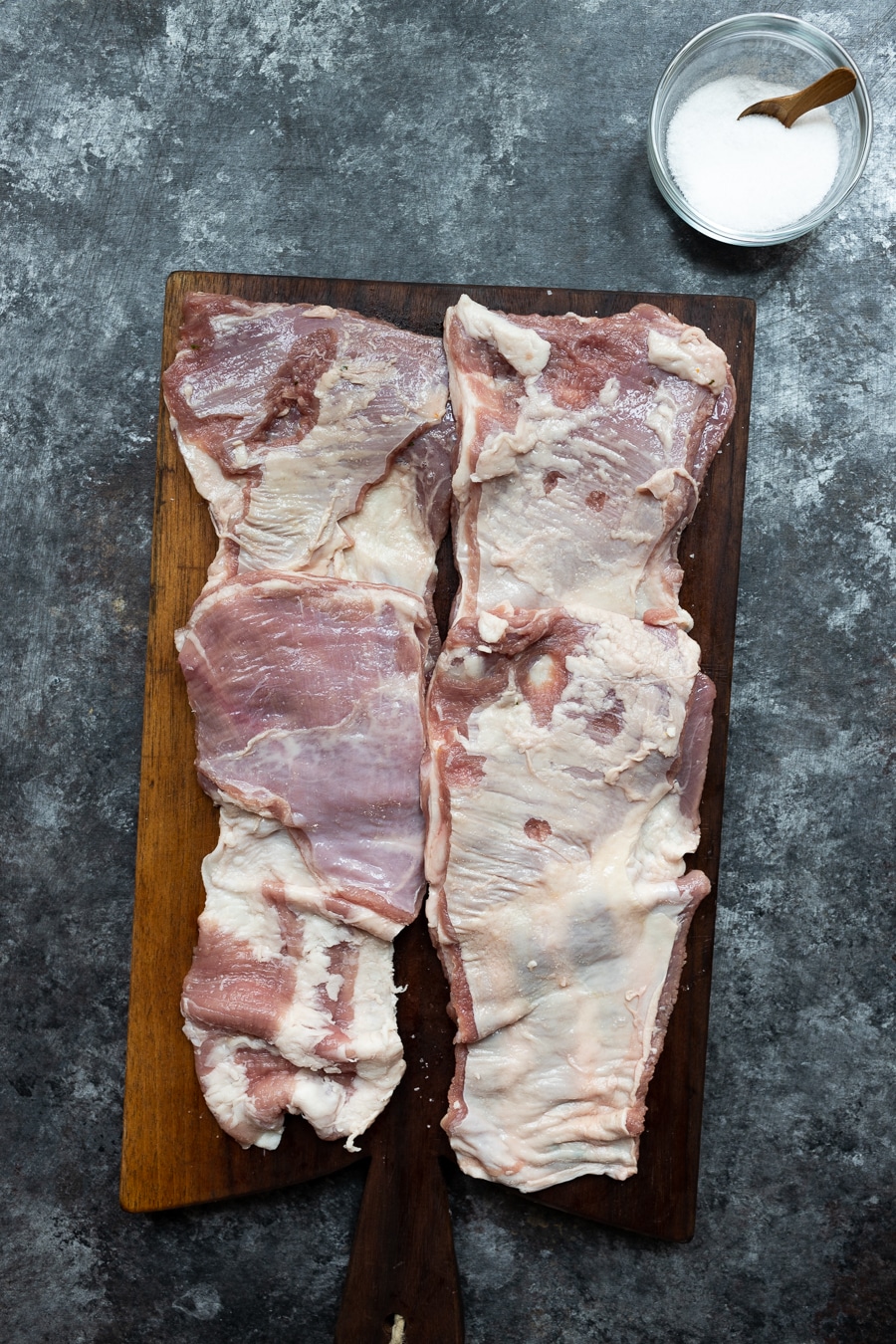 This was my first time working with lamb belly.  I was so excited as well as hungry to begin.  If I am being honest, I did have to do a bit of research before I became completely comfortable in the kitchen with it.  I did not want to ruin it with hasty experiments as I have said before, their lamb is special.  Lamb belly is not the belly, it is actually the lamb breast, and it is very flavorful as well as a fatty cut of meat which means, even more delicious.  This cut can be cooked in a few different ways such as slow-braised, smoking, or grilled.  For this recipe I have given two options;  on the grill and roasted in the oven.   The meat arrived in a package that weighed 2 pounds and included four bellies that were ready to be used.  I did remove some of the excess fat but left enough to keep the meat moist and flavorful.  I rendered the excess fat and roasted fingerling potatoes in it.  Potatoes roasted in animal fat are so flavorful and a fantastic addition alongside roasted or grilled meat. 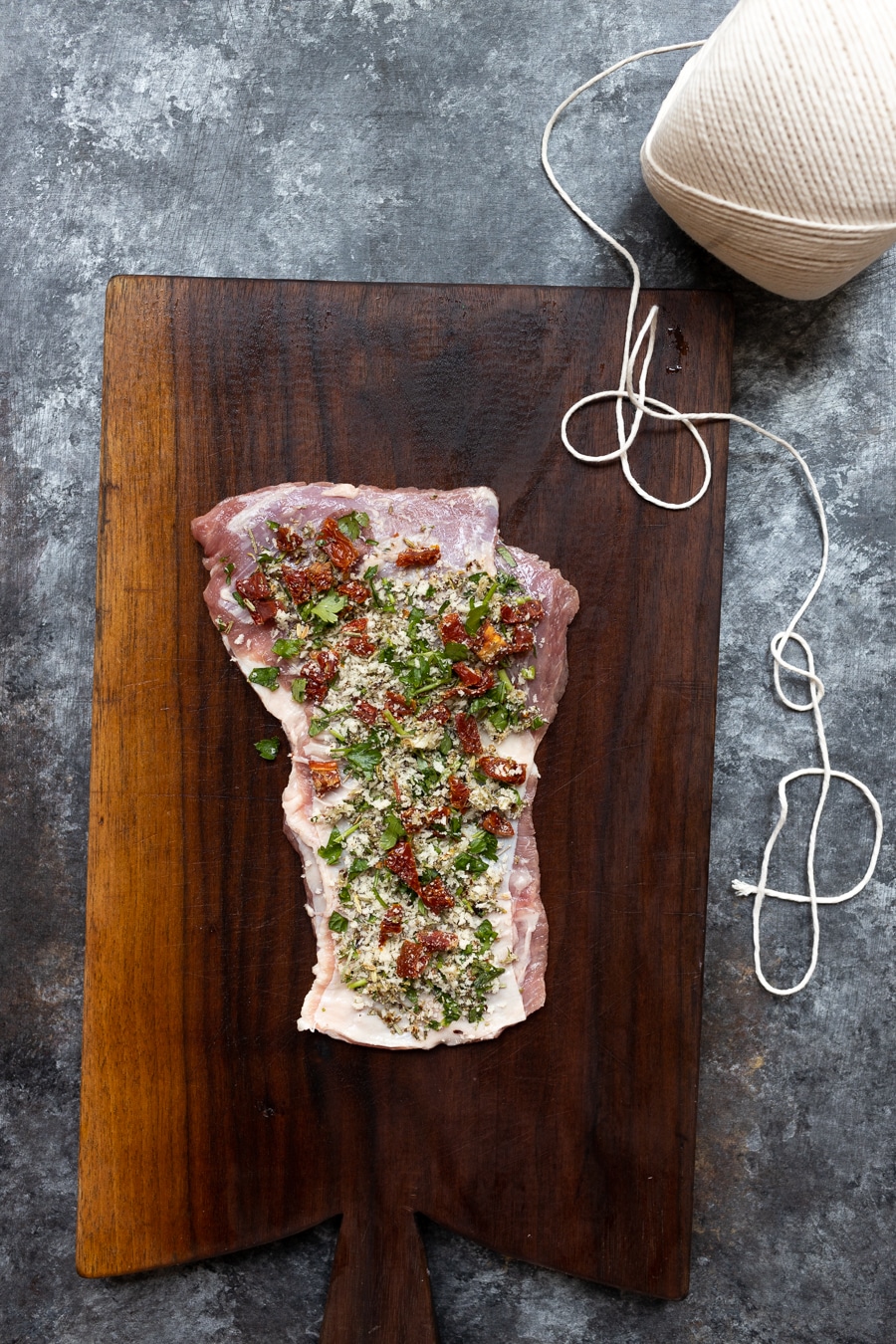 When I first started working on the filling that I wanted for this recipe I used a spinach or kale heavy filling.  In the end, it left the recipe rather soggy and bland.  Not what I wanted as well as not as flavorful.  The panko and herbs were washed out. I went with the old saying “less is always more”.  I seasoned panko with simple Italian herbs along with some sundried tomatoes and fresh parsley.  Oregano, fennel, rosemary, and chili flakes are staples in most pantries as well the flavors complement the gammy richness of lamb belly. 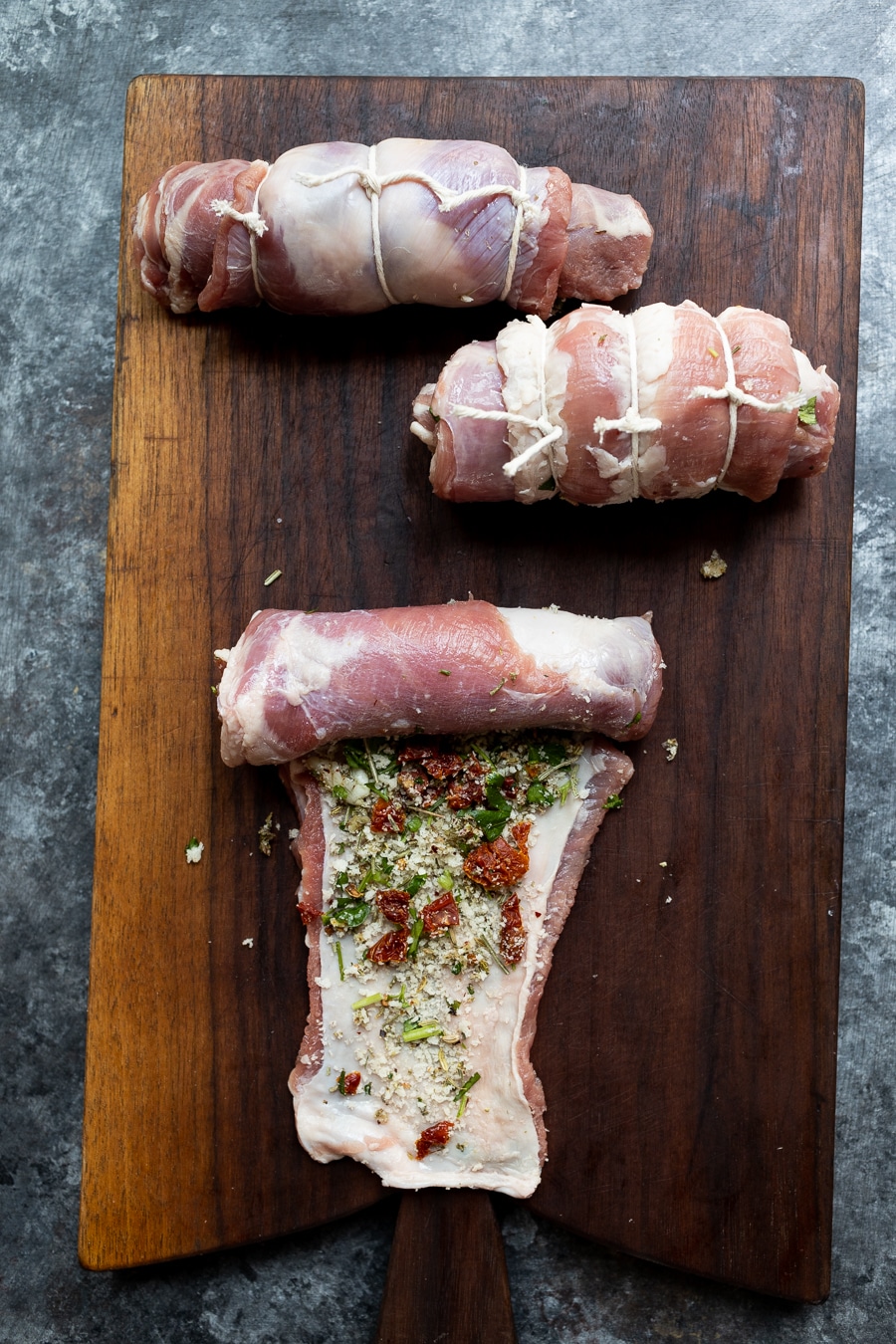 Lamb belly is thin and only needs a dusting of filling before rolling it up into small parcels.  I wrapped the meat with kitchen twine to keep it together while cooking.  You could use toothpicks, but look at how great twine looks. 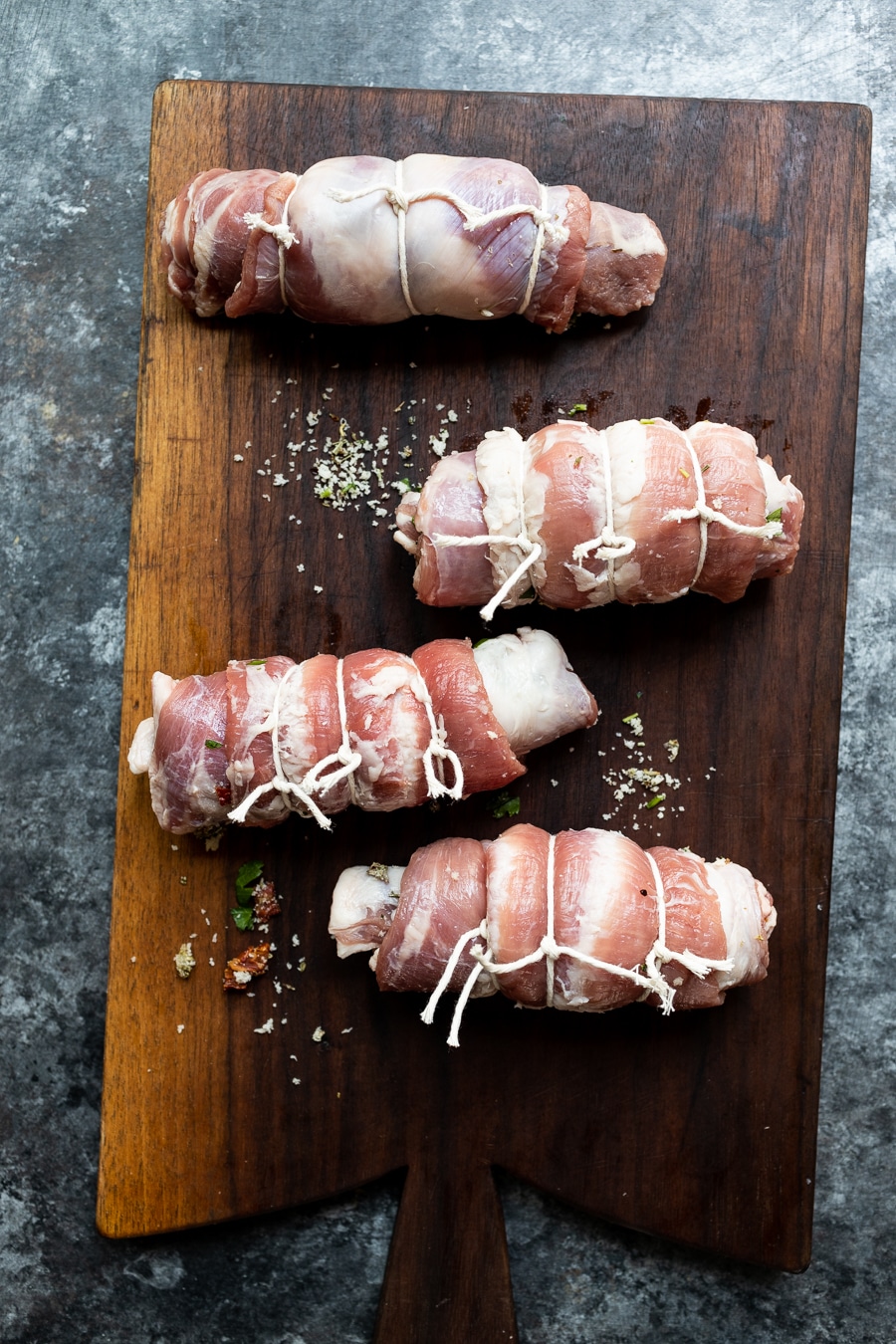 I cooked the lamb belly two ways;  half of the recipe on the grill and the other half in the oven.  Both methods are very good.  Personally, I preferred on the grill as it gave the meat an added smoke flavor with I think is really delicious with Italian Style Lamb Belly. 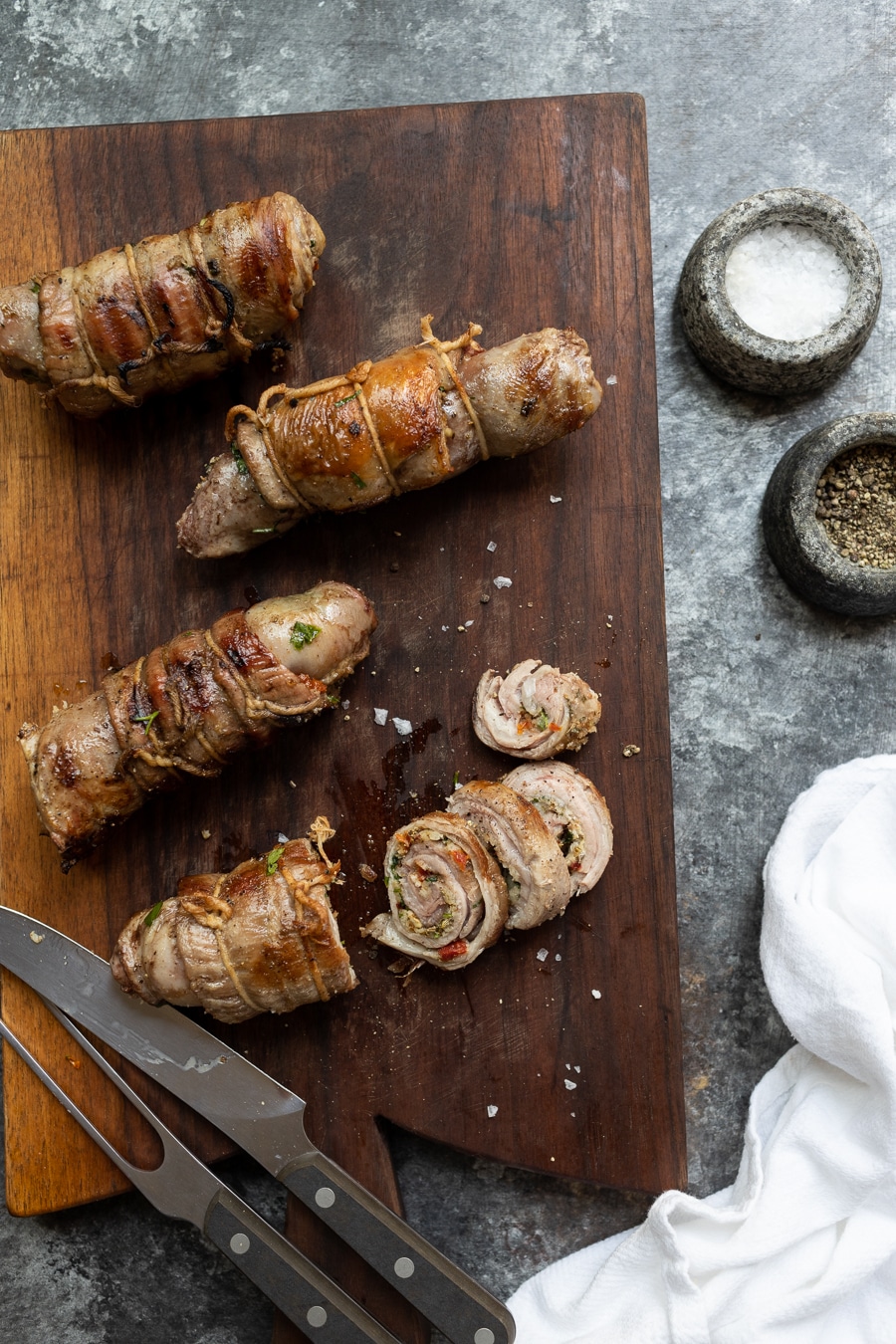 This recipe took me to another place if only for a few moments of my day.  It is rich and flavorful but also light.  It is an added step rendering some fat to roast the potatoes but so worth it.  I have approached this recipe as well as most since the pandemic as slow and savory, taking the time to do the little extra steps to enjoy a meal that takes me away for a bit.

This is the guideline I follow when cooking Lamb:

At least an hour before cooking, take the lamb out of the refrigerator and bring to room temperature.  Trim some of the fat from the lamb belly - leave some of it on the meat as it does keep the meat moist and adds flavor.

Lightly salt the pieces of lamb belly on both sides and set aside.   (I rendered down the trimmed fat - over very low heat until most of the fat was removed.  I had a little over 1/4 cup of melted lamb fat that I used for browning the meat as well as for making the potatoes)

Place the oregano, fennel, rosemary, chili flakes, garlic, and salt in a mortar and blend to mix together.  If you do not have a mortar you can quickly pulse in a food processor. Mix the herbs with the panko, sun-dried tomatoes, and parsley.

Reserve 2 tablespoons of the mixture if you are making roasted potatoes.

Lay the belly out on a cutting board and evenly distribute the panko mixture between the pieces of lamb belly.

Tightly roll each piece of belly starting from the widest end and working towards the narrow end.

Over medium-low on the stovetop, heat a medium-sized heavy frying pan.

Add a little of the rendered lamb fat.

Lightly brown all sides of the rolled lamb belly.

Place the pan into a 350 degree preheated oven.

Remove from the oven and cover with foil and let sit for 5 minutes.

Brown all sides of the rolled lamb belly.

Cook the lamb until the internal temperature reaches 130.

Remove from the grill and cover with foil and let sit for 5 minutes.

Did you make this recipe?

Thank you for joining us at the Chez Us table. We truly love having you here.Have you made this recipe?  Please share what recipes you are enjoying from Chez Us. We would love to see and be able to share with our followers. Use the hashtag #chezuseats on your social media channels, then we can pull a chair up to your virtual table and share with our friends.