When we are on the road for work all healthy eating flies out the door. We are too tired to even think about venturing out to explore new eats .  Our days are long, and we end up bellying up at the hotel bar by dinner time.  Then what happens is an order of icy cold beers and buffalo wings.  Occasionally, a green salad served alongside to make us feel better.  With every messy bit we wonder out loud why no one ever serves baked buffalo wings instead of fried. 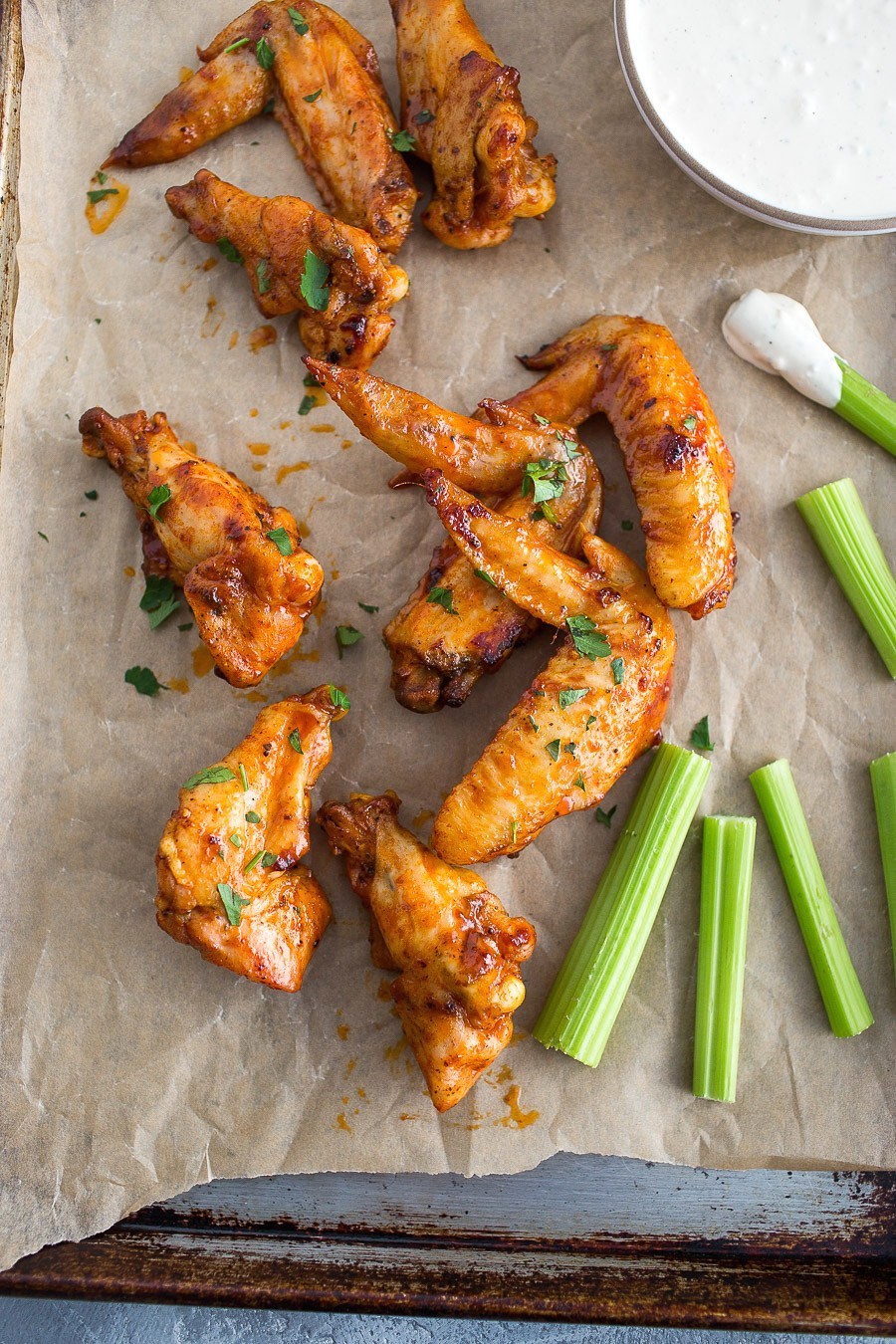 The same thing happens when there are delays at the airport we find ourselves bellied up to a bar drinking cold beer and eating chicken wings. Actually we are now convinced that the best airport food is most likely chicken wings.  We would rather throw back chicken wings instead of a non-mentionable double cheeseburger.  Last year it became a game to eat chicken wings at every airport in search of the best.  Over our last platter of over saturated fat, we once again questioned why no one serves platters of Baked Buffalo Wings.

After chatting about what were the best foods to be served during Super Bowl it was decided that buffalo wings are a must.  Is it even really the Super bowl without a platter of killer wings?  Lenny decided to tackle the task of creating the best baked chicken wing recipes.  After many conversations about which way to go, Cajun, Asian, Portuguese, Ukrainian, we decided that some things are meant to be traditional.  America football deserves a traditional buffalo wing.

The past month we have consumed pounds of chicken wings which was a very good thing.  Lenny nailed it with the sauce for this Baked Buffalo Chicken Wine recipe.  It is perfectly seasoned with the right consistency that coated each wing.  Pure sauciness.

We also played with techniques, we tried boiling, baking and roasting the chicken wings as we didn’t want to fry them.  The best texture and the most flavorful wings hands down was the baked version.  They were perfectly crispy which helped keep the sauce on the meat.  Bonus is that you can eat twice as many since they are baked, doesn’t that mean healthier in code?

Be sure to serve these killer wings with a classic blue cheese dressing.  You are going to have your guests eating out of your hands!

Preheat the oven to 425.
Place the chicken wings in a deep bowl.
Sprinkle lightly with salt and pepper.
Drizzle in the olive oil and mix well.
Let sit for 30 minutes to bring to room temperature.
Slide into the oven.
Bake 15 minutes.
Flip the wings over and bake another 15 minutes.
While the wings are baking make the sauce.

In a saucepan melt the butter.
Stir in all of the ingredients except the cilantro and baking chicken wings.
Stir over medium heat for 3 minutes.
Lower heat to a very low simmer.
Cook for 10 minutes.
Stir in 1 tablespoon of cilantro.
Remove from the heat and set aside.

Not sure how I missed this recipe, but I'm glad your Instagram brought me here. Dang, between this and the guacamole, it's looking like Superbowl 50 could be a Chez Us menu at my house!

What a lovely surprise to find that you'd included our Sriracha Wings in your lineup of phenomenal chicken wings! Many, many thanks from all of us at Leite's Culinaria....

OK, no problem! I ended up copying and pasting this recipe, plus the classic blue cheese recipe. 2 more hours until kick-off!

Is the first ingredient supposed to be 1/4 cup butter or 1/4 stick?

Can't wait to make these tonight for the Super Bowl! Is there is any to print your recipes without the picture? Running a bit low on printer ink and wanted to print more of your recipes!

Sorry about that Meaghan. Still figuring out the ziplist. I cut and paste recipes onto a blank document when I don't want photos. Hope that helps. And the wings are delicious!

Lorraine @ Not Quite Nigella

I always thought that buffalo wings were deep fried which was why I had never made them before but good to know that the best results are baked! I heard on television that there was a shortage of chicken wings in America :o

Lorraine, not true, baked rocks! We are not into deep frying either, and found the baked ones really amazing. There may be a shortage after all the times it took us to get this 110% - I have to say I am not in a hurry to eat any wings again, for a while!