I have to admit I have been eavesdropping on a Twitter conversation between, Jamie, Deeba, Hilda, Barbara, Meeta, Ilva, Shelley, Erin, Deborah,  Rachael, and Ria (whew that was a lot of ladies) the past couple of weeks.  I do have better things to do with my time, then listen in on a virtual conversation about things that have nothing to do with me.  I couldn’t help myself as they were chatting about one of my favorite treats to enjoy, the French Macaron.  I could not stand it any longer, I tweeted Rachael and asked what was taking place?  How did I miss this mac-a-thon?  And how could I get involved?  Being as sweet as she is, she told me to tweet Jamie for all the info, so I did! 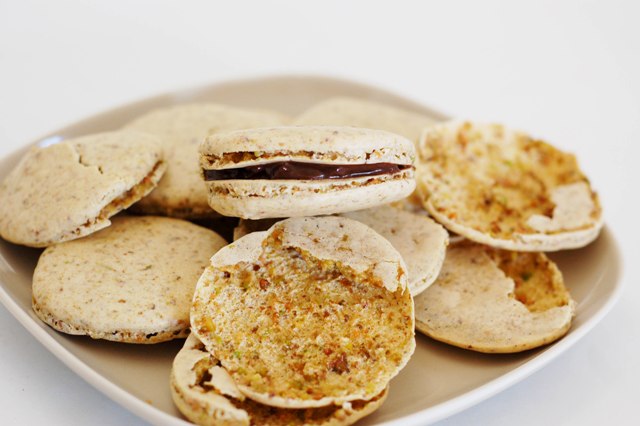 This wonderful group of bloggers is attempting to perfect the macaron, the French macaron, by using a recipe from the queen of macarons, Helen of Tartelette.    Since I was a little behind, they are posting today, I had to take the jump on it, and decided only to make one round of macarons using Helen’s recipe.  We were supposed to make the basic shell and fill with a chocolate ganache.

Everything was right on track, egg whites sat out for 24 hours, the batter came together beautifully, and the macarons looked so pretty on the baking sheet.  I pulled them out of the oven looking the best they ever have (mine usually look like dreidels).  They had feet, yes, they had feet and after they cooled, when I attempted to remove them from the baking sheet, their feet, legs and all else stayed behind!  What went WRONG?  I think I should have baked for another minute (Jamie suggested this as well) or maybe it was the humidity in the air?  I had one left that was nearly perfect.  At least it had a top and a bottom;  the rest, let’s just say they will be a great little nibble with a hot cup of coffee!

*disclaimer, I did not, make a batch of ganache for this photo shoot, I used Nutella.

I love the nutella disclaimer!

I have a major attack yesterday afternoon when I heard my Chinese students planning to go to McDonald. I had no choice but to give in to my crave.

One of the kids he bit one day was asked by his dad what happened to him, and he answered that he had had a Big Mac attack!! LOL He is nearly 30 now, and we still tell this one at family dinners...

I don't eat from McD's, but let me tell you a cute story about Big Mac Attacks...my oldest nephew's name is MacKenzy, and we call him Mac. When he was little and in day care, he was a biter.

You got feet! Very pretty macaroons. I wish I had hopped on to the mac attack bandwagon back then. Was too swamped with work to take on the challenge. Your macs look fab, and just like you when I'm short on time/lazy/without any real excuse not to make ganache, I use Nutella as well. :)