In case you have been living under a frying pan for the past few months and are not familiar with Julie and Julia, it is the newest foodie movie coming out on August 7th.  It is the story of Julia Child and Julie Powell and how their lives intertwined 41 years apart from each other.   It is a movie, based on a book, which was based on a food blog.  I am sure this will be a must-see within the entire food blog community!  In honor of the movie as well as the ever exchanging Julia, I made Julia Child’s Creme Brulee to celebrate. 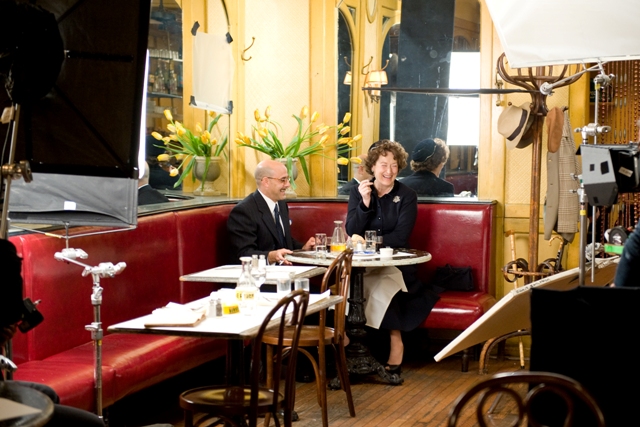 We were overjoyed when Kristen Tarnol, part of the marketing team over at Columbia Pictures contacted us to be one of their featured Food Blogs on the Food Blogs of the Day (thanks, Joy) segment of the Julie and Julia site.  This was an honor, after all, we would not only be in spirit with one of the best, Julia Child, but also in the company of some of the brightest raw food talent out there.

Julia Child holds a special place in our hearts.  There are many reasons for us to love her:  she grew up in San Francisco, which is our home;  she lived in Cambridge, Mass, which is where Lenny grew up, well Somerville is right next door to Cambridge.  She did not begin her cooking career until she was in her 40’s, I did not start this cooking site until I was in my 40s; she was a spy with the OSS, I have always had this secret desire to be an agent with 007.  She lived in Paris, we dream of the day when we will have an apartment there and split our time between two countries;  and she did not believe in “diets”, she ate it all, we both feel one should not diet but instead enjoy all food, whether it is cream, butter, red wine or cocktails before dinner!

Julia, brought French cooking to all American homes, during the era we were growing up.  We both remember watching her in awe as she flipped omelets in the air to introducing her chickens before roasting them.  She was fun, messy and “real”.  Julia was definitely a breath of fresh air for the cooking community.  Years after the French Chef she stared with Jacque Pepin in Julia and Jacques Cooking at Home, which was equally as entertaining!

Forty-one years later, Julie Powell, started a blog, before most of us even really knew what a blog was.  She was going to chronicle her journey through Mastering the Art of French Cooking, 365 days and 536 recipes later, she had a book published and now a movie!

When we were asked to be featured as one of the food blogs on the movie site, besides saying a big YES, my mind went wild trying to figure out which recipe to make.  Would it be the quiche recipe that inspired me to actually make a quiche?  Would it be a roasted chicken?  Or maybe something more complicated and classically French such as beef bourguignon?

Then, we found out that our debut date would be the 28th of July.  I knew we would not have enough time to be as elaborate as we had hoped since we were leaving for a long weekend on a camping trip.   Now the question was, “what Julia recipe would be appropriate for a camping trip!?!   There was only one that came to mind, a classic Creme Brulee.   According to Julia, France, Britain, and Spain, all claim to have invented this dessert, my two cents?  It is a classic Julia recipe.

We take creme brulee on most of our camping trips.  We tried to recount this past weekend as to why we do it?  We really cannot remember, it is just of our things to do.  As well we wondered, did Julia Child go camping and if she did would she take this luscious dessert?  I normally use a different recipe but was thrilled to find a Julia Child recipe, it was equally as easy as well as delicious.  Maybe even a little more delicious!  And yes, it is really easy to take creme brulee on your next camping trip, just follow our steps below! 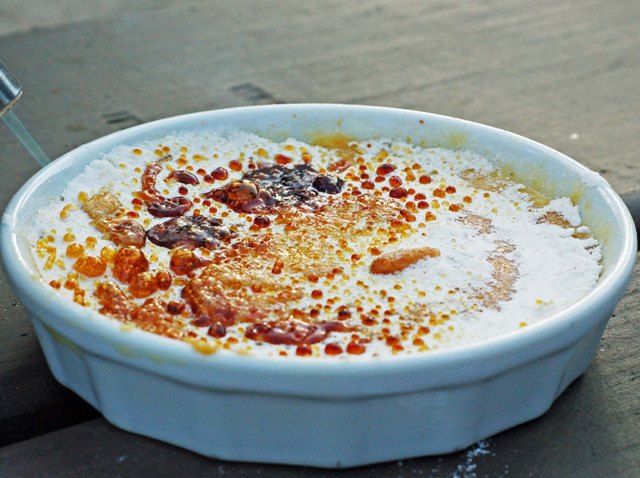 * if you want to take camping, do not add the sugar coating until you are ready to eat them.  After baking and chilling, wrap each custard well with foil.  Then seal in a zip lock container or bag and put in your cooler.  Before eating proceed with the sugar and caramelizing step.

Great blog, I share this blog with my friends. Hope to see more from you.

I love your website! Keep up the great work!

How did I miss this??! wonderful

Camping Creme Brulee! I 'm so jealous, its great to read everyones nice comments, and all the great family recipes.

Congratulations on the feature! Your Creme Brulee and camping trip reminded me of a commercial, which is actually a car commercial, but the tag line made me think of your camping trip,