Nanette got herself an ice cream maker for her birthday and ever since (it has only been a couple weeks) we have been chatting about ice cream and gelato.  She made a cinnamon gelato that was sweetened with honey and said it was to die for.  Since we were pretty sure a big bowl of it would not make the flight over from Melbourne, she passed along the recipe and in true Chez Us form I decided to up the game with this recipe for Cinnamon Gelato with Malassadas. 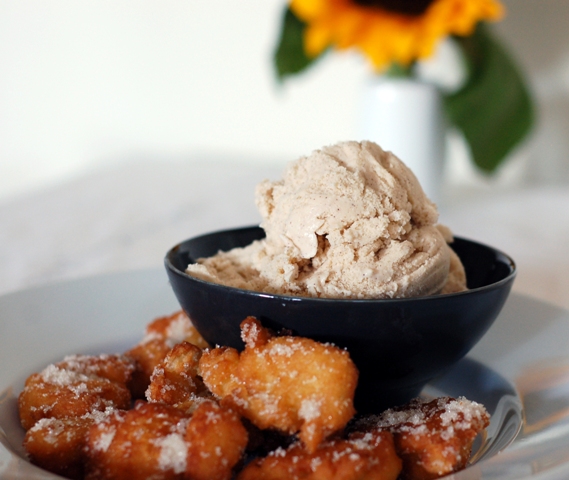 I decided to remake a Portuguese favorite, the Malassada, to serve with it.  Instead of the traditional big piece of “fried” dough, I gently fried small little pillows of the batter and then rolled them in unrefined sugar that I barely kissed with orange essence.  The slightly sweet fried dough went so well with the warm honeyed ice cream.  The only thing missing was a friend to share this with.

You will not want to miss Nanette’s Gelato, she served hers with a warm sugary plate of Loukoumades – she gives you the easiest recipe for making Loukoumades as well;  guess what I will be making next time!

Mix yeast with 1 T. of sugar and warm water, set aside in a warm place until foamy. Heat milk with butter and salt until hot but not boiling. Take off of heat and let cool slightly.

Then knead, may need to add more flour, if the dough is too sticky. Do this process 3 times.

Then let rise in a warm place, until doubled, about an hour.

I like to lay them on a paper towel to absorb extra oil.

While still warm, roll them in sugar until coated.

I am a fried dough lover, but I'd never heard of these! They look spectacular. I just want to dive right in and scarf'em down! Haha! Thanks for the recipe :)

I really must pull my ice cream maker out to start making these.. The fried dough is new to me. Very interesting!

wow these look so yummy! fried dough fritters and gelato sounds like a wonderful pairing.

Wow, delicious. The gelato pairs beautifully with the Malasadas. I have never eaten them before, but they sure look more-ish!

This is a perfect dessert! The gelato sounds divine, and those malasadas look irresistible.