The August Daring Bakers’ challenge was hosted by Angela of A Spoonful of Sugar and Lorraine of Not Quite Nigella.   They chose the spectacular Dobos Torte which is a recipe from Rick Rodgers’ cookbook Kaffeehaus, Exquisite Desserts from the Classic Caffés of Vienna, Budapest, and Prague. I  say it often but one of the things I love most about this group is being challenged outside of my baking comfort zone, and tackling a recipe I would never normally make.  Onward to the Daring Baker Dobos Torte – this recipe is so fun to make.  Do not be intimidated; if I can do it, so can you. 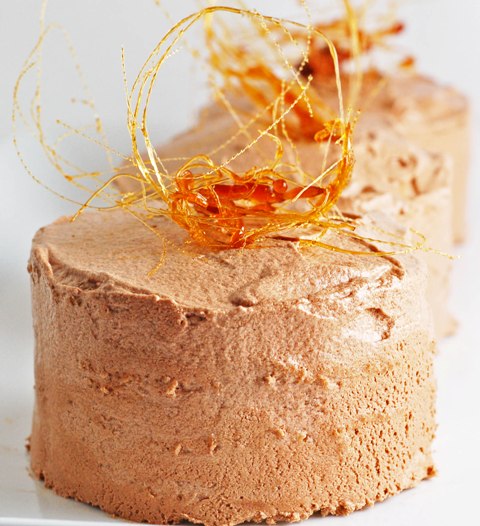 We got a wonderful invite over to John & Michelle’s home for an amazing dinner.  John is the chef and creative food genius behind Food Wishes.  Food Wishes is an amazing site that is full of cooking video recipes.   We knew he was working on some “dry aged beef” and that they would be the star of the dinner, so I had to bring a dessert that would be just as fantastic, the Dobos Torte!

“The Dobos Torta is a five-layer sponge cake, filled with a rich chocolate buttercream and topped with thin wedges of caramel. (You may come across recipes which have anywhere between six and 12 layers of cake; there are numerous family variations!) It was invented in 1885 by József C. Dobos, a Hungarian baker, and it rapidly became famous throughout Europe for both its extraordinary taste and its keeping properties. The recipe was a secret until Dobos retired in 1906 and gave the recipe to the Budapest Confectioners’ and Gingerbread Makers’ Chamber of Industry, providing that every member of the chamber can use it freely.” quoted from the Daring Baker’s Forum.

The recipe is fairly easy.  The sponge cake was very simple to make and came out very light and springy.  I decided to make individual tortes so I cut the cake into 24 small circles.  The butter-cream was also very light but I was very disappointed as I used a very dark chocolate and it came out very light in color, this was not what I had wanted.  The topping to the torte is a caramel topping that is made with lemon juice, I used orange with a touch of cardamon added.  The topping was supposed to be some sponge cake that was drizzled with the caramel topping, I was not sure about this, so I practiced on some extra pieces of sponge cake.  I was glad I did as I thought the caramel would make the cake too chewy.  Instead, I attempted to spin the caramel into “spun sugar”, which ended up being a very fun process and I spent a good part of the afternoon spinning away!  The end result was light and very flavorful dessert.  I would make this again, but I would try to use a different butter-cream as I would have preferred it to have a much darker look and taste.

A big thank you to Angela and Lorraine for being our wonderful hostesses this month and for picking a great challenge.  Be sure to check out the Daring Bakers blogroll for more tortes as well as Food Wishes to see what else we had for dinner that night!

Directions for the sponge layers:

** note – The sponge layers can be prepared in advance and stored interleaved with parchment and well-wrapped in the fridge overnight.

Directions for the chocolate buttercream:

** note – This can be prepared in advance and kept chilled until required.

Lorraine’s note: If you’re in Winter just now your butter might not soften enough at room temperature, which leads to lumps forming in the buttercream. Make sure the butter is of a very soft texture I.e. running a knife through it will provide little resistance before you try to beat it into the chocolate mixture. Also, if you beat the butter in while the chocolate mixture is hot you’ll end up with more of a ganache than a buttercream!

Directions for the caramel topping:

Angela’s note: I recommend cutting, rather than scoring, the cake layer into wedges before covering in caramel (reform them into a round). If you have an 8” silicon round form, then I highly recommend placing the wedges in that for easy removal later and it also ensures that the caramel stays on the cake layer. Once set, use a very sharp knife to separate the wedges.